The Assembly of Canonical Orthodox Bishops of the United States dedicated the first Sunday of October in recognition of Orthodox college students in their local parishes and financial support of OCF.

This month OCF is holding virtual events, social media contests and prayer services on college campuses across the country. OCF encourages Orthodox individuals to invite their friends to local Orthodox churches or to write a letter to someone in prison, an initiative organized by Orthodox Christian Prison Ministry.

Orthodox Awareness Month aims to serve as a reminder of the long and rich history of Orthodoxy in America and the contributions Orthodox Christians made to American culture, history and public life. Despite being often overlooked by academics and underreported by the media, Orthodox Christianity and its teachings have a lot to offer to Western culture.

Here are five books to read for insight into the history and theology of the Orthodox Church, the lives of saints and the evolution of the Orthodox faith in America’s northernmost state.

“The Orthodox Church – An Introduction to Eastern Christianity” is an Orthodox classic.

The book was written nearly 60 years ago by Timothy Ware (Metropolitan Kallistos). For the last six decades, the book has become widely popular and is used as a textbook at universities and seminaries around the world.

The book is divided into three parts. The first part follows the historical development of the Orthodox Church. The second part provides a general introduction of Orthodox doctrine, teachings and worship. The last part talks about healing the rift between the Catholic West and Orthodox East.

This book is suitable for Orthodox and non-Orthodox readers and can serve as a practical guide to Orthodoxy.

On Aug. 24, 2022, Metropolitan Kallistos passed away (or as the Orthodox say, fell asleep in the Lord) at the age of 87. He is remembered as a world-renowned scholar and beloved professor.

Kyriacos Markides, a sociologist of religion at the University of Maine, wrote “The Mountain of Silence: A Search for Orthodox Spirituality.” Markides was raised Orthodox in Cyprus, his home country. He abandoned the faith and later in life returned to the Orthodox Church.

The book follows Father Maximos (Bishop Athanasios of Limassol in Cyprus) in his journey to establish monasteries and churches on the divided island of Cyprus, where communities are split between Greek and Turkish influence. This moving story is enriched by details of the island’s tragic history and the Turkish invasion in July 1974.

Until Father Maximos’ arrival in Cyprus, monasticism was disappearing and considered irrelevant. However, Father Maximos’ mission gave the Orthodox Church on the island a new lease of life. Many Cypriots found solace and relief from their personal troubles in Father Maximos’ spirituality and faith.

In a Religion Unplugged interview, Rod Dreher praised the book saying that it left a lasting impression on him.

“That is the book that I recommended more than any other to Orthodox inquirers. It’s set at a very basic level but it gives you a real sense of the way Orthodox think about prayer and spirituality,” he said. Dreher also thanked Father Maximos for bringing him to Orthodoxy through his testimony in Markides’ book.

Father Spyridon Bailey is a convert to Orthodox Christianity. Hs a priest of the Russian Orthodox Church Outside of Russia (ROCOR), serving in England and Ireland. The book follows his life changing journey to the heart of Orthodox spirituality and monasticism on Mount Athos.

During his time on Mount Athos, Father Spyridon encountered monks and hermits who live their Orthodox faith and share the wisdom of their lives. His book provides an insight into this sacred and entirely male community.

Mount Athos, called the Holy Mountain, is a 30 mile long by 10 mile wide isolated peninsula in northern Greece. The peninsula is the home for 20 Orthodox monasteries and approximately 2,000 Greek, Serbian, Bulgarian, Russian and other monks. These monks live in constant prayer and asceticism attaining a oneness with God. For non-Orthodox, the best way to describe Mount Athos would be a Christian Tibet.

Saint Nikolai Velimirovich of Zhicha wrote in Serbian that Mount Athos is: “An empire without a crown, a nation without army, a country without women, wealth without money, wisdom without education…”

The arrival of St. Herman and a group of eight monks on this island on Sept. 24, 1794, planted a seed for the Orthodox Church in the region. “Orthodox Alaska: A Theology of Mission” by Archpriest Michael Oleska explains how Alaska became the spiritual cradle of Orthodox Christianity in North America.

The book is divided into three parts. The first part covers the historical background of the Alaskan Orthodoxy. The second part talks about the Alaskan Orthodox Mission. The third part addresses the hard times of the suppression of Orthodoxy in Alaska by the federal government and Alaska’s enduring Orthodox heritage.

“Orthodox Alaska: A Theology of Mission” gives a well-deserved credit to Alaska Natives, for their role in the process of creating the indigenous Orthodox culture.

Oleksa was an Alaskan Orthodox missionary for nearly half a century. He completed his doctoral work in Church History and Patristics at the Orthodox Theological Faculty in Presov, Slovakia in 1988. He then spent a year of research and teaching at Moscow’s St. Patriarch Tikhon Theological Institute. In 1996, he was elected Dean of St. Herman Seminary in Kodiak, Alaska.

Known for his missionary work and the history of Orthodox Church in America’s northernmost state, Father Oleska is a leading expert on Orthodoxy in Alaska. His expertise makes him a go-to person to talk about Orthodox Church in Alaska and his “Orthodox Alaska: A Theology of Mission” is the most comprehensive, if not the only book of its kind.

Long before popular podcasts “The Bible in a Year with Fr. Mike Schmitz” and “Bible 365 with Rabbi Dr. Meir Soloveichik,” there was “The Prologue of Ohrid,” written by Saint Nikolai of Zhicha. Although it doesn’t discuss the Bible, this seminal work covers the lives of saints, hymns, reflections and homilies for every day of the year.

Saint Nikolai Velimirovich of Zhicha is one of the most influential Orthodox theologians of the 20th century. His work, theological depth and oratory skills earned him the nickname the “Serbian Chrysostom,” after Saint John Chrysostom, an early church father who was known for his preaching and public speaking and for composing the Sunday liturgy most commonly used in Orthodox churches today.

“The Prologue of Ohrid” was originally published in 1926. In 2017, the text was translated from Serbian, edited by Bishop Maxim of the Serbian Orthodox Diocese of Western America and published by Saint Sebastian Orthodox Press. In addition to the new translation, this edition includes many new saints from the Orthodox world that are not found in the original version.

Saint Nikolai’s Prologue is well known and widely read among Orthodox Christians around the globe. Many Orthodox Christians find this book an inspirational guide to lives of saints and the Church’s wisdom. In addition to various editions that can be found on the Internet, the Australian and New Zealand Diocese of the Russian Orthodox Church Outside of Russia, posted the complete version of the Prologue on their website.

Jovan Tripkovic is a graduate student and teaching assistant at the University of Wyoming and a contributor to ReligionUnplugged.com and other publications. 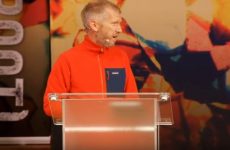