Just before his crucifixion, Jesus bade farewell to his disciples, telling them, “My joy I leave with you.” (John 15:11) There was something different about the early Christians—a tranquility and certainty that was apparent to the outsider. One of the earliest observations made by a nonbeliever was, “See how these Christians love one another.”

The early Christians not only loved one another and believed everyone equal in the eyes of God, but lived that way as well. They were cheerful in the face of adversity and imminent torture for they had no fear of death, no guilt, no regret. The early Christians set the example for all succeeding generations of Christians and Christianity as a great-hearted, inclusive, giving religion, its people generous, loving, humble and forgiving. And so it continues to this very day.

But a shadow of unseemly pride has darkened some corners of this religion of selflessness and joy. It manifests itself in the idea that ours is and should be a “Christian nation.”

Between 164 and 169 million American adults identify as Christian or roughly 65% of the population.  It’s down 12% from the figure a decade earlier but is still a decided majority. Does a majority of Christians make for a “Christian Nation?”

A long-dormant but emerging force is the “Christian Nationalist.”  As America becomes more diverse, as minority religions and those who no longer identify with a religion increase in numbers, so do the volume and boldness of the Christian Nationalist faction of American faith and politics, which bears as much resemblance to actual Christianity as a sword does to a plowshare or a spear to a pruning hook.

The Christian Nationalist profiles almost invariably as white and professing to believe in the First Amendment tenet of freedom of religion—as long as Christians come first in line for that freedom, with other religions given their obligatory nod but directed to the back.

A Christian Nationalist may or may not identify as such (it is, after all, a relatively new term) but subscribes to a specific national and cultural template that involves first and foremost the words “America” and “Christian” to be synonymous or at least uttered in the same breath. As a Christian nation with a Christian template, certain things would need to be adjusted to fit into the paradigm. These would include history—as taught it would mandate a Christian-based curriculum predicated on God’s special relationship with America; immigration—with surgically precise restrictions on certain religions and ethnicities in order to ensure that diversity is nipped before it can get out of hand; and a redefinition and enforcement of moral codes, including stiff penalties for same-gender sex, premarital sex and other behaviors considered immoral.  Some Christian nationalists have agitated for a Constitutional amendment to recognize America’s Christian heritage and ethos. This ethos, given the distinctly white composition of avowed Christian Nationalists, would necessarily exclude or reduce to the status of lower caste citizens such as Black Americans, Asian Pacific Americans, Native Americans and others considered to be of a race other than white, a bin encompassing Muslims, Sikhs and yes, Jews.

Several prominent politicians have called for a raising of the flag to Christian Nationalism. One member of Congress has said, “We need to be the party of nationalism, and I’m a Christian and I say it proudly, we should be Christian nationalists.”  Another said, “The church is supposed to direct the government, the government is not supposed to direct the church. That is not how our founding fathers intended it. And I’m tired of this separation of church and state junk that’s not in the Constitution.”  And a former National Security Advisor thundered at a Texas church to rapturous ovations, “If we are going to have one nation under God, which we must, we have to have one religion. One nation under God, and one religion under God.”

One may contrast the heatedly exclusive and decidedly political rhetoric of the Christian Nationalist movement with that of Christianity itself, its loving kindness, its willingness to sacrifice and its love of one’s neighbor as exemplified by the Christian pursuit of the abolition of slavery in the past and its pursuit of justice—racial equality, the rule of law, and the application of principle over power, creed over culture, humbleness over heritage—in the present.

The Christian Nationalist sees America becoming more America—which is to say more diverse, more multifarious, more varied in faiths, colors, and moral centers—and feels the utmost pangs of personal threat. The patchwork quilt must be torn apart, believes the Christian Nationalist. The mosaic must be shattered. The rainbow must be bleached white. 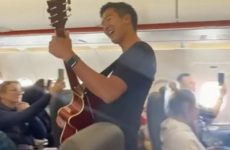