A private Christian university in Seattle is being investigated by the state of Washington over an anti-LGBTQ hiring policy that has prompted months of campus turmoil.

State Attorney General Bob Ferguson released a statement Friday confirming his office sent a letter to Seattle Pacific University in early June seeking information regarding its alleged discrimination against LGBTQ staff members through its “employee lifestyle expectations” policy. The policy requires staffers to refrain from “cohabitation, extramarital sexual activity and same-sex sexual activity,” and those who violate it face disciplinary action, including the possibility of employment termination.

The June letter did not outwardly accuse the university of violating the state’s anti-discrimination laws, but it said state prosecutors had “learned of information” that suggested the university was violating state law by discriminating against faculty and staff on the basis of sexual orientation.

The letter asked the university’s general counsel to produce answers to four written questions about the institution’s hiring policy, as well as complaints going back to 2017.

In response to the June letter, Seattle Pacific filed a federal lawsuit in district court last week, saying that based on protections of religion and speech it should not have to comply with the state’s request. The suit alleges the university’s mission of Christian education is “under fire” from Ferguson and that the probe asks about “confidential religious matters” that are beyond the attorney general’s purview.

In the suit, the university confirms it holds “traditional Christian beliefs” about marriage and sexuality. The Free Methodist Church, with which the school is affiliated, believes sexual intimacy should be between a man and a woman but is “committed to the dignity and worth of all humans,” including the LGBTQ community, the suit says.

Lori Windham, senior counsel at religious liberty nonprofit Becket Law, which is representing the university, said Ferguson “singled out” Seattle Pacific because of its Christian beliefs.

“For years, American courts have been clear that external officials cannot dictate how religious institutions live out their faith commitments,” Windham said in an email. “Our laws protect religious universities from unlawful demands by governmental officials.”

In Friday’s statement, Ferguson called the lawsuit a demonstration that Seattle Pacific University believes it is “above the law.”

Seattle Pacific has been marred by months of controversy following the decision by its board of trustees in late May to uphold its “employee lifestyle expectations” policy. The move prompted the resignation of two trustees and a wave of student protests, which included a viral moment earlier this summer in which some seniors, during their graduation ceremony, refrained from shaking the interim president’s hand and instead handed him an LGBTQ Pride flag. Last month, student activists ended a monthlong sit-in, vowing to file a lawsuit of their own.

Seattle Pacific University is among the 180 colleges listed by the LGBTQ nonprofit Campus Pride as “the absolute worst, most unsafe campuses for LGBTQ youth.” 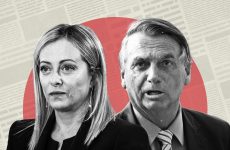 Opinion | How Christian Nationalism Is Taking Root Across the World