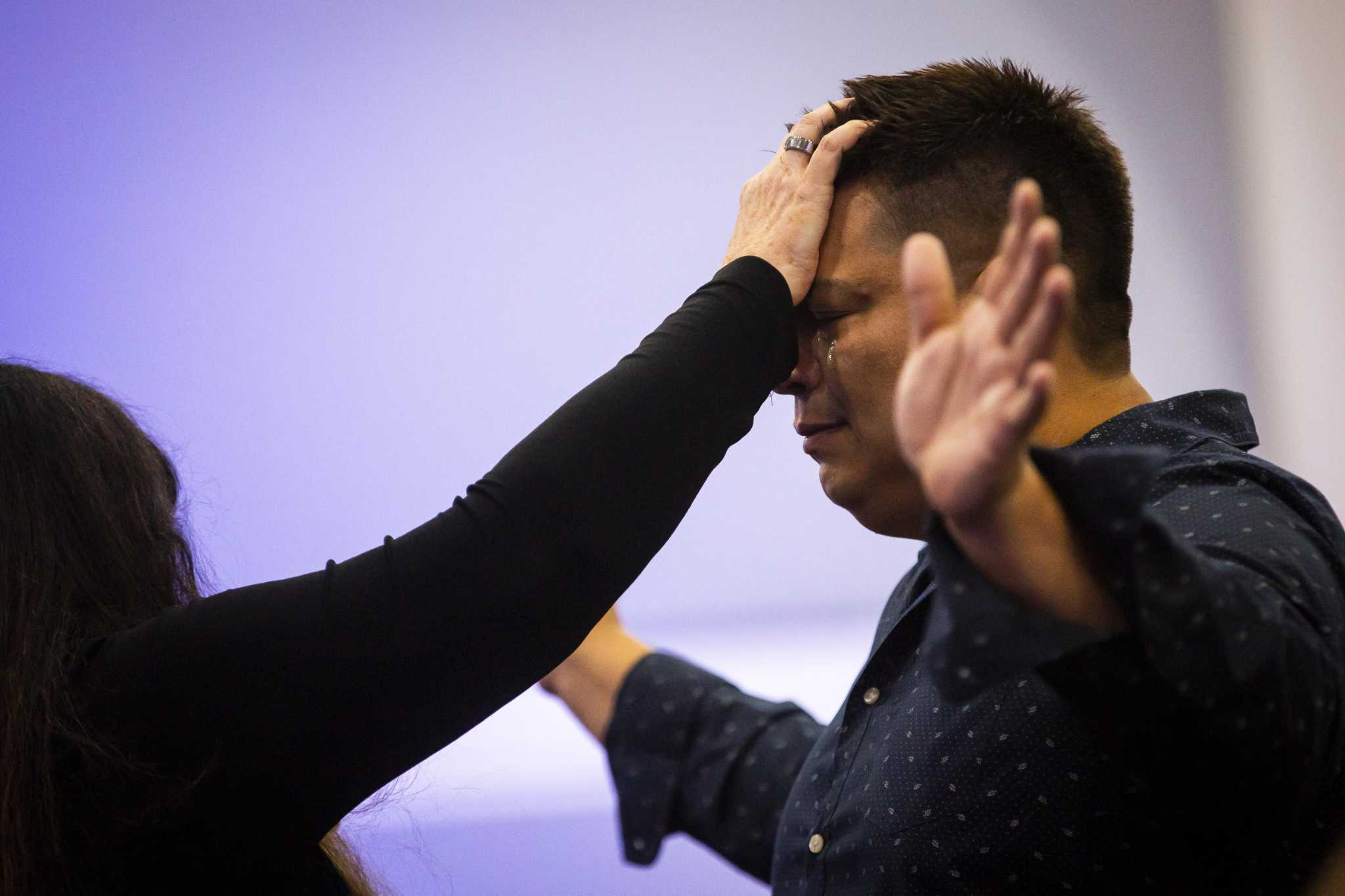 LaCricia Hlavinka hasn’t had a Thanksgiving meal in a quarter-century.

Nor does she plan to this year, again opting to spend the holiday with an empty stomach and, maybe, bellowing into a microphone the latest prophecy revealed to her by God.

While millions of Americans nestle into couches for their post-dinner naps on Thursday, Hlavinka and other members of Reigning Glory Church will begin a three-day fast. They believe their faithfulness to God will spare them the worst of COVID-19.

“It’s the hardest to give God time during the holidays,” she said. “We decided we’re going to make a personal sacrifice to the Lord and make a statement by putting him first.”

At first glance, the Sugar Land congregation might easily be confused with a typical Pentecostal church. Services often run for more than two hours, much spent with Hlavinka weaving through the crowd and “laying hands” on those she says she can cure of physical, spiritual and financial ills, sometimes with a simple touch.

She’s been doing the same every Sunday and Wednesday since the late 1990s, when she moved to Houston and began attending revival events in the area.

Hlavinka, who was raised Catholic, said the Lord made his first revelations to her when she was a preteen, and he has since tipped her off about everything from earthquakes and Latino voting patterns in the 2020 election to, in early fall 2001, an impending attack on American soil that would draw the country into war.

In July 2019, she said she received another “prophetic word.” It warned of a looming and catastrophic plague.

“A virus is coming, and a lot of people are going to die,” she recalls being told. “But God said, ‘Fear not. I will be with you, and I will give you power over this virus.’ “

And so, the church’s annual Thanksgiving fast event is going ahead largely as scheduled.

Few in the congregation of 50 to 100 people have worn masks, believing that, by showing signs of their commitments through praise or, among other things, monetary donations, God will provide health and safety from a virus that’s now killed a quarter-million Americans.

Hlavinka said she understands why some people might be skeptical of that belief. It has commonalities with teachings of the “prosperity gospel,” in which adherents plant “seeds” — often in the form of monetary donations — that God then grows as a reward for their faith in him.

Prosperity gospel preachers such as Lakewood Church’s Joel Osteen and Paula White, an adviser to President Donald Trump, have often drawn the ire of other Christians, many of whom say it’s exploitative of both the Gospel and congregants, some of whom may give large sums of money because they equate financial giving with salvation and worldly success.

Recent research has also shown a correlation between belief in the prosperity gospel and opposition to government restrictions on churches.

“The connection is easy to see,” the researchers found in the study. “If the church is the instrument of personal health, then shuttering the church is a direct threat to personal safety during a pandemic.”

Prophetic ministry and teaching is “connecting people to the Presence of God so they see, hear and feel Him for themselves.’ It reveals the heart of God through words and actions,” according to Anthony Hilder, a U.K.-based church and ministry leadership consultant. “Some individuals may have mystical and unusual experiences with God, but this is a scriptural principle so should not be dismissed out of hand because they do not fit our own grid.”

Hlavinka hesitates to say her church teaches the prosperity gospel. There are parts of it with which she agrees, but she criticizes those who she says have “abused” the broader idea behind it: that God “wants to prosper his people.”

That prosperity, she said, includes protection from the pandemic. “If God said that he was going to protect us, then for me to say everybody should wear a mask is like going against what God said,” she said.

Jason Chesson, 48, said he was similarly weary of the idea behind Reigning Glory when he and his wife, Amy, 46, first started attending about seven years ago. Eventually — and like many others — they came to love the sense of community at the small church.

Since then, the couple has spent six-plus hours a week traveling from their home in College Station to the church for Sunday and Wednesday night services.

And now, Chesson prides himself on his work as a “catcher,” responsible for supporting congregants if they faint from Hlavinka’s touch during her rounds of faith healing.

He agrees that much of it may sound strange to outsiders. But he’s convinced that Hlavinka has a gift, and one he said he’s seen and felt first-hand.

“Our life has been radically changed,” his wife Amy Chesson said. “We’re different people than we were when we started here, and for the better.”

Others have similar stories.

Claudia Jivala, 32, said she was sold on Reigning Glory when, three years ago and with a strained relationship with her husband, she first heard Hlavinka preach about marital problems that felt oddly familiar to Jivala.

Eventually, her husband started coming with her, and the marital squabbles that were routine in their lives slowly faded as they embraced their faith together.

For that, they thank the Lord — and to a lesser extent, their prophetess Hlavinka. “This church has changed my heart, my life,” Jivala’s husband, Rene said. “I just love Jesus in a way that you can’t explain.”

We Need to Be Better Losers

The Church has failed in COVID-19 pandemic