“My Christian faith leads me to believe God will be the one to decide when and how the world will end, not mankind.”

There was no signature or return address — it was anonymous. I received this letter in the mail, which was responding to an article I had written in a newspaper. My piece was about climate change, Christmas, and church; how each of these, in an unconventional way, capture the intricacies of both my religious life and work as a climate advocate. I discussed how my faith, above everything else, is what propelled me into this work. In addition to this, I called upon the Church to do its part in combating climate change.

Despite the opposition, I welcomed the letter with appreciation. It was apparent — the reality of climate change was clashing with the letter-writer’s faith and Christian theology. I have sympathy for those in this predicament.

But, being a Christian or believing in climate change is a false choice. I, too, have wrestled with the notion of God’s grace, meaning God having the last word and rescuing us from ourselves, and our ability to push ourselves to the brink of desperation where it appears that grace can no longer save us. How do we reconcile this? Must we deny climate change for the sake of staying true to our values and a gracious God? Have we reached a theological impasse?

First, we would do well to remember that God’s grace doesn’t negate human responsibility. There are costs to our choices, and sometimes those costs are high, unbelievably high. And, we are fully responsible for them. If I litter in my neighbor’s yard, I will be held accountable and face a penalty. If we fail to be good stewards and wreck our environment, we are responsible and we will deal with the repercussions just the same.

Second, it’s worthwhile to draw attention to an important fact: The author of that letter had fallen victim to the alarmist messaging around climate change. This issue ought not to be framed as one concerned with preventing an apocalypse; it should be framed as an issue concerned with preventing widespread human suffering, suffering that will increase exponentially the longer we take to act. It is not the case humans will drop off the face of the planet if we reach a 1.5 degrees Celsius increase in the global average temperature. However, if we do, the ramifications will be substantial, and we should do everything in our power to stay below that threshold. Reframing the issue in this way doesn’t mean that it is any less urgent; climate change demands an immediate, aggressive, and thoughtful response.

By distancing ourselves from a doomsday framing of climate change, we can see that there is no theological impasse. We don’t need to discuss whether God is or isn’t the one to determine when the world will end. All we need to agree on is that we have a responsibility to alleviate or prevent the suffering of our brothers and sisters. And, I doubt any serious Christian, or any decent person for that matter, would argue we don’t.

Grace is not an invitation to act irresponsibility, free from any concern of what our actions might do. We are playing with God’s grace when we ignore climate change and handle our life-support system recklessly, assuming God will save us if something goes wrong. We are testing the limits of something we have no right to test. We’ve overstepped our boundaries.

If this makes you as uncomfortable to read as it does for me to write, don’t despair. The best way to assuage this discomfort is to respond not by hiding behind your faith but by allowing it to lead you towards a life of radical, faithful, and sincere stewardship.

Kelsey Grant is a junior at the University of Colorado, Boulder, majoring in political science and philosophy. She is an active member of her church and has been a Sunday School teacher for the last seven years. She founded the Creation Care ministry at her church, has organized youth-led worship services devoted to climate action, and have helped craft a Sunday School curriculum on environmental stewardship. She is a youth leader in a nonpartisan organization called Citizens’ Climate Lobby. She resides in Longmont. 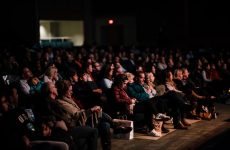