A religious school in Florida says it will only refer to students by their sex assigned at birth, while pupils who are gay, transgender or gender nonconforming “will be asked to leave the school immediately.”

NBC News obtained an email from the Grace Christian School in Valrico, about 20 miles east of Tampa, sent before the beginning of the school year by Administrator Barry McKeen.

The June 6 correspondence to parents cited scripture and said that students will be referred to by the “gender on their birth certificates” during the school year beginning this month. While the email refers to “biological gender,” the National Institute of Health defines “gender” as a social construct, as opposed to “sex,” which is the biological difference between females and males.

“We believe that God created mankind in His image: male (man) and female (woman), sexually different but with equal dignity,” the email said.

“Therefore, one’s biological sex must be affirmed and no attempts should be made to physically change, alter, or disagree with one’s biological gender — including, but not limited to, elective sex reassignment, transvestite, transgender, or non-binary gender fluid acts of conduct (Genesis 1:26-28). Students in school will be referred to by the gender on their birth certificate and be referenced in name in the same fashion.”

It continued: “We believe that any form of homosexuality, lesbianism, bisexuality, transgender identity/lifestyle, self-identification, bestiality, incest, fornication, adultery and pornography are sinful in the sight of God and the church (Genesis 2:24; Leviticus 18:1-30; Romans 1:26-29; I Corinthians 5:1; I Corinthians 6:9; I Thessalonians 4:2-7).”

“Students who are found participating in these lifestyles will be asked to leave the school immediately,” the email said.

While the policy is not new, it must be understood and accepted completely, the email said, adding that parents would “have to agree to all policies and procedures before your student may start school in August.”

Multiple attempts to reach representatives of Grace Christian School for comment, including McKeen, were unsuccessful.

The email was a factor in prompting the family of a 16-year-old girl, who is gay and was a student at the school, to transfer her to another religious school that is more accepting.

“It’s not like my daughter goes around wearing rainbow flags or anything like that,” the teenager’s mother said. “But I’m not going to have her feel ashamed of herself for any reason.”

The woman and her daughter asked that their identities be withheld out of fear of harassment.

The teen said she felt like a “social outcast” at Grace Christian, but that her new school allows her to “just be myself.”

“At the new school, I feel normal,” she said.

An 18-year-old transgender man who graduated from Grace Christian last school year said that, while no email like the one in June was ever sent while he was at the school, it was well known that any students in the LGBTQ community had to keep it a secret.

“It was not something I could be open about. Only a select few of my friends could know about it,” he said of his gender identity. “Sometimes, we couldn’t even know if we could trust people in our friend group because we didn’t know if anybody would say anything to faculty.”

He noted some students were uncomfortable with LGBTQ students “due to the faculty’s influence.” The man asked that his identity be withheld to protect his family from harassment.

An 18-year-old woman who graduated from the school last year and is gay said there were times when anti-LGBTQ messages were expressed during chapel hours on school days.

She said one day, McKeen “started yelling about how if you’re gay you’re going to hell.”

She said McKeen told students, “It’s Adam and Eve, not Adam and Steve” and that he said he knew there were LGBT people at Grace Christian and when he found out who they were, the students would be “kicked out.” Two other former students corroborated this account of McKeen’s chapel hour comments.

The woman, who asked to remain anonymous because of potential harassment against her, said the school’s perspective didn’t hurt her. But that was not the case for every student in the LGBTQ community who attended the school, she said.

“One of my friends who is closeted, she gets very hurt by it and very scared,” she said. “She has very bad anxiety about it.”

The graduate said when the topic was addressed, her friend would “go into the bathroom and cry.”

Josh Bell, executive director of One Orlando Alliance, an LGBTQ nonprofit in central Florida, was brought up in the conservative United Methodist Church and was taught homosexuality is wrong, he said.

Bell, who is gay, said a school policy such as the one at the Grace Christian School will lead to emotional trauma and could possibly lead to physical harm for some LGBTQ students.

“We know from data, from surveys, from a long track record of LGBTQ youth, that policies like this are inherently harmful,” Bell said.

“Students who receive these messages are much more likely to experience depression, to experience suicidal ideations, to socially withdraw, to become vulnerable really to all sorts of harmful coping mechanisms.”

Being told by religious authority figures their identities are wrong, Bell said, is destructive on multiple levels.

The policy at Grace Christian School is the second time this month a religious school has been accused of shutting its doors to the LGBTQ community.

A Christian school in Louisiana allegedly forced a married same-sex couple to find a new school for their kindergartner because of their “lifestyle choices.” 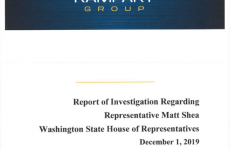