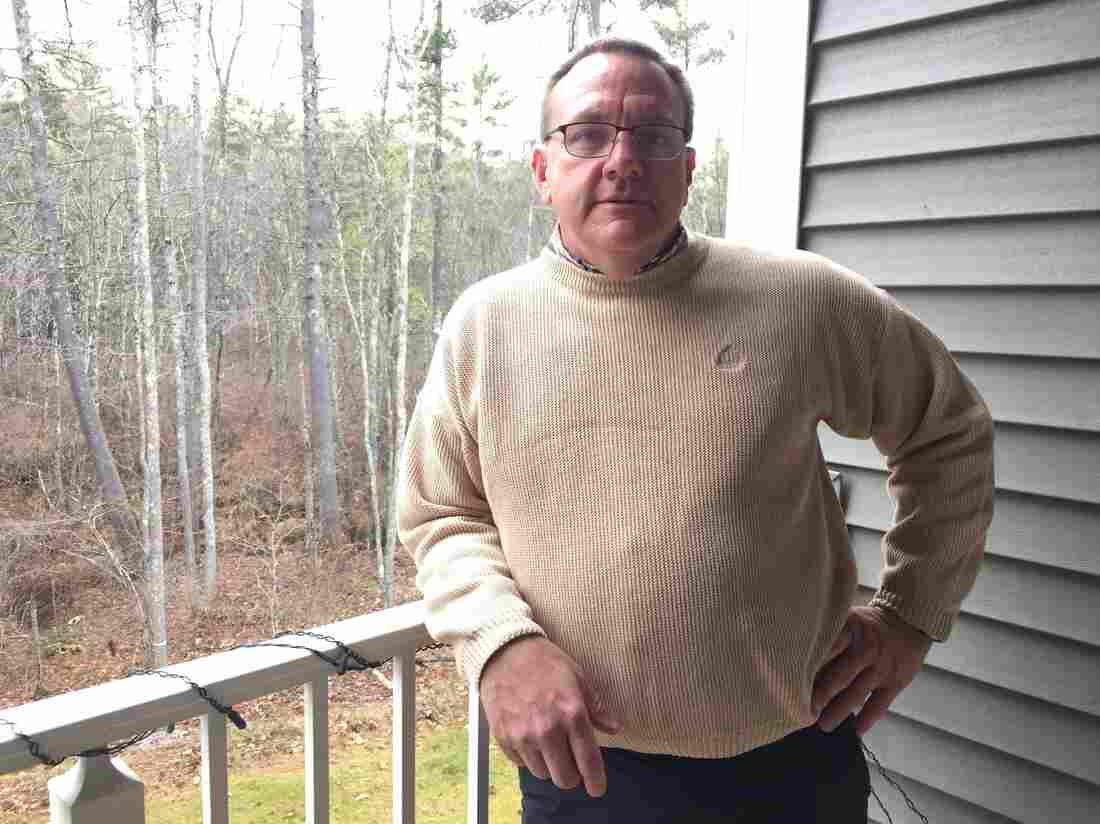 Keith Meehan is one of an estimated 1 million Americans who get health care coverage through a health care sharing ministry. After Meehan’s back surgery, Aliera and Trinity HealthShare declined to pay approximately $200,000 in medical bills, saying back pain was a preexisting condition. Todd Bookman/NHPR hide caption

Insurance regulators across the country are taking action against a Georgia-based company that markets and administers programs on behalf of health care sharing ministries.

State officials in Texas, Colorado, Washington and most recently New Hampshire accuse Aliera, as well as Trinity HealthShare, an entity with which it contracts, of violating state and federal requirements. Those violations include failing to make its religious affiliations clear and selling plans outside the markets allowed by statute.

Members of health care sharing ministries pay monthly premiums, with the expectation that the money will be shared when medical bills arise. Though no exact figures exist, industry groups say close to 1 million Americans get their health coverage through these Christian-based entities.

“There are legitimate health care sharing ministries that offer coverage for their members, but Aliera and Trinity are not one of them,” said New Hampshire Insurance Commissioner John Elias, who accuses the companies of selling illegal insurance products.

After his doctor recommended back surgery for a disk issue, Aliera and Trinity HealthShare assured Meehan the procedure didn’t require preapproval. But after the surgery, it declined to pay approximately $200,000 in medical bills, contending his back pain was a preexisting condition.

Health care sharing ministries don’t have to follow the same rules as insurers, and they face no requirements to pay claims. To industry watchers, their marketing materials don’t lay out these risks clearly enough.

“Having a disclaimer somewhere on Page 17 saying this is not insurance and there is no guarantee to pay is not necessarily going to turn people away,” says JoAnn Volk, a researcher at Georgetown’s Center on Health Insurance Reforms.

But to many families, health care sharing ministries offer a lower-cost alternative for coverage that also aligns with their values.

“The cost was typically a fraction, typically well under half and usually closer to a third of what the cost of conventional insurance was,” says Fenton Groen, a builder in Rochester, N.H., who has been happily enrolled in health care ministries since the early 1990s.

Along with the lower sticker price, Groen believes the popularity of health care sharing has grown in recent years because most ministries won’t cover abortion services. Many also offer prayer hotlines for members.

Groen says he supports regulators stepping in to stop a company like Aliera if, as alleged, it is not adhering to the few regulations these entities must follow.

“Given the explosive growth of health care sharing ministries, it is not surprising to me that someone would try to cut in on that,” says Groen.

Other health care sharing groups say Aliera’s actions are harming the reputation of the broader industry.

Investigative reporting by the Houston Chronicle revealed that the co-founder of Aliera, which is based in Georgia, previously served time in prison for securities fraud. The company is facing a proposed class-action lawsuit in Washington state for alleged deceptive practices.

“Aliera will continue to vigorously defend against false claims made about the administrative, marketing and other support services we provide to health care sharing ministries (HCSMs), and we’re confident the HCSMs we support will defend the right of their members to exercise their religious convictions in making health care choices,” wrote the company in a statement.

Meehan, the rice salesman with $200,000 in unpaid medical bills, says he wishes he had read the fine print before signing up.

“I mean, I’m not trying to skate on my responsibilities,” he says. “Had I known that this was the way it was going to turn out, I would have suffered. I can endure some pain, both physical and mental. But I would have never gone through with the surgery.”

More pain is on the way. Meehan says he is considering filing for bankruptcy.

This Christian rapper has the No. 1 album right now: ‘I put my life into this’