The video starts with one person unfolding a metal chair that shows Grace Christian Academy’s logo, with ambient music playing in the background, along with another person’s laughter off-camera. He then ushers another person into the room, telling him to sit down.

In the video, this person was wearing a white hood and carried a wooden staff with a container of what appeared to be hardwood floor cleaner.

A person off-camera then screamed and commanded the person wearing the hood to talk. He shouted “who do we hate?” before screaming a racial slur. Throughout the video, people off camera are heard cackling and laughing.

The leadership of Grace Baptist Church and Grace Christian Academy were made aware of an incident that occurred. We are taking appropriate disciplinary steps to address this issue.

Later in the afternoon, the school administration sent the following message to parents:

The leadership of Grace Baptist Church and Grace Christian Academy were made aware of an incident that occurred with a small group of students. We are taking appropriate disciplinary steps to address this issue.

Thank you for your continued prayer and partnership with GCA.

While the video included a chair from Grace Christian Academy, it was not clear if the video was filmed on the school’s campus. In the academy’s 80-page handbook, only the harassment policy includes how incidents involving race are handled.

“Grace Christian Academy is committed to providing an environment in which every student is treated as an image-bearer of God,” the handbook said. “Conduct, whether intentional or unintentional, that subjects another student to unwanted attention, comments or actions because of race, national origin, sex, physical characteristics or disability, robs the student of dignity and is not permitted.”

It specifies that verbal, visual and social media harassment is covered in the policy. The harassment policy also specifies that reports of harassment will “be given serious consideration and investigated thoroughly in a prompt and confidential manner.”

The policy also specifies that students who violate the policy can face disciplinary actions up to dismissal.

The video was shared across social media, and Representative Gloria Johnson (D – Knoxville) said it was distressing that the students felt comfortable enough to film the racist video.

“This is so distressing,” she said on social media. “The fact that they were so bold and not even a bit embarrassed about this is just shocking. That they felt comfortable sharing it means that they thought everyone else would think it was funny also. Who taught them this?”

The Ku Klux Klan has killed several people throughout history, and the Southern Poverty Law Center calls it “the oldest and most infamous of American hate groups.” They also said while the Ku Klux Klan is still active, membership has declined partly due to “continuous infighting that has long been a hallmark of the Klan.”

Between 1865 and 1950, historians said the Klan was responsible for 6,500 killings in a lengthy period of racial terror.

Editor’s Note: WBIR chose not to share the uncensored video due to its racist nature. The face of one person who walks through the censored video has also been blurred because their age is unknown and they may be a minor.

What is a Christian at the very root? 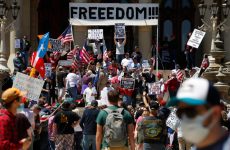 How Christian nationalism may determine whether you wear a mask