PARIS — The empty auditorium of the drowned world was black with foreboding. A gaseous, lemony scent filled the air. Every once a while a drip would ripple out through the pool of water that had swallowed the seats three rows deep. Then furious gray storm clouds rolled across an LED screen on the ceiling. Thunder crashed. And out splashed a woman in an austere black velvet cassock, hemline dragging in the flood. It was raining outside on Sunday in Paris, and at Balenciaga, a tempest was raging indoors.

There were more long black robes and vaguely sinister coat-hanger-shoulder suits. Leather and wool outerwear, the collars jutting up to the base of the skull and descending like a ski slope to the shoulders. Overhead, birds swarmed and flew away. A man appeared in a silicon jacket covered in spikes like porcupine quills. Fire consumed the sky. Accessories came with “bondage cuffs” and “mask” sunglasses (so-named in the show notes). Some models — not all were professionals; some were musicians, students, bike messengers, artists, of all ages — got wellies, some got waders, most got neither, and got wet. The earth appeared from afar in its blue and green calm. A few quilted floral housedresses appeared. A few suits in ThermaForm jersey molded to the body like a corset.

There was a total eclipse. It was so dark, it was almost impossible to see what was going on. Even when you could see, it was hard to concentrate. Shoulders were so sharp they could slice bread. Streetscapes blurred by. Articulated, branded motorcycle leathers and silk soccer jerseys appeared. Evening gowns with the leggings, gloves and shoes built in. The kind of clothes scavenged from the remnants of a society past. And rebuilt. Maybe.

J.G. Ballard (and his post-apocalyptic science fiction) circa 1962 would have felt right at home in Demna Gvasalia’s world circa 2020.

There have been so many crises over the past weeks, so much looming, dire news — a rising death toll; declarations of war; religious bloodletting — that climate change, recently fashion’s mea culpa and cause, has almost fallen off the radar. It certainly seemed to have fallen off the catwalks.

Only last season, Clare Waight Keller at Givenchy was upcycling old denim and putting it on the runway. This time, other than two upcycled fake furs pieced together from remnants past, she mostly seemed to be flitting between ideas: louche tailoring and scarflike graphic silk dresses; big, blouson shoulders and feathery swirls. Her couture is coherent and convincing; it’s unclear why her ready-to-wear is so limp.

So while it wasn’t a surprise that Stella McCartney, who has always made eco-awareness a foundation of her brand, had activists in bunny (and horse and gator) costumes handing out baby trees to supposedly help guests be carbon-neutral before her show of Erté-inspired twist-and-tie ease in silk and hole-punched vegan leather, a broader acknowledgment of environmental catastrophe and the disaster we — and this industry — have wrought was overdue.

(Not that putting climate change on the runway or giving out seedlings are solutions; it can’t counteract the fact that making more stuff just contributes to the problem — or that the shows still require driving all over Paris; Givenchy was held in the Hippodrome de Longchamp on the city’s edge. But given that the show is the designer’s voice and a soapbox, it is, at least, an amplification of the issue.)

Thom Browne built a snowscape in the École des Beaux-Arts, complete with white-dusted firs and bare, skeletal branches, and then sent out his models in pairs — a man and a woman each time — like the refugees on Noah’s Ark, only instead of a flood it looked like there had been an avalanche. One led by a parade of animal-headed men in red, white and blue striped skirts and platform hooves, Mr. Browne’s Greek chorus: a giraffe, a hippo, a lion, a horse (and so on).

Because, Mr. Browne said after the show, this was his first coed production, and also because those kinds of gender demarcations are on their way to extinction. To prove it, he later mixed up the couples and it was almost impossible to tell who was who.

Each couple toted his or her own version of a matching animal bag in black leather, until there was a whole menagerie’s worth (all progeny of the original bag, introduced years ago in the shape of Mr. Browne’s dog, a dachshund named Hector). A beaded boa constrictor stole was slung over the shoulders of the final pair. They had survived the end of one world only to … care to try an apple?

It was a fittingly surreal moment topped only by an even more surreal moment at Schiaparelli, where Daniel Roseberry introduced his second ready-to-wear collection, with prints created by using a flatbed scanner (there’s one in the atelier) to digitize three-dimensional objects such as perfume bottles, vintage furs and — an octopus.

Purchased at a fish market, it had been scanned, digitized and then transformed into an image splashed atop silk shirtdresses and slouchy pantsuits. Also later cooked and eaten for dinner (“I knew someone would ask me that,” Mr. Roseberry said). Waste not. Elsa — the house’s founder, not the “Frozen” one — would have approved.

(Jellyfish also made an appearance at Ms. McCartney’s show, but in a stylized diamanté pattern on generous silk pajamas and caftan dresses.)

Even Pierpaolo Piccioli of Valentino, who averred backstage before the show that “I don’t think fashion has to be a manifesto,” put more black in his show than he had ever before (probably more than 70 percent of the clothes were black or navy or very dark gray) — sheer shirts and easy suiting and elegant sheaths, dresses and coats brightened by a single, strategically placed, brightly colored bloom. One leather jacket was covered in 4,000 black rose petals.

There were the usual signature ethereal dresses, to be sure, glinting like Orion in the night, but given Mr. Piccioli is a designer known for his ability to remix the rainbow, it was the black that lingered. It was meant, he said backstage, as “a picture of a moment” we all share, no matter our age or size or sex (there was a real mix in the show). Gently though it came, darkness fell. 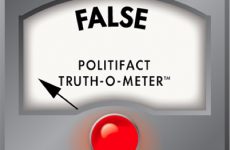 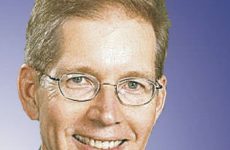 A look at how Christianity elevated children 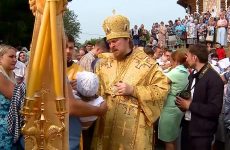