Christians are being attacked in American culture for the slightest evidence of their being identified as Christian, and one pastor says this could be a sign the Lord is coming back – soon.

It is argued that it is getting hard to be a Christian in public these days – even for a Hall-of-Fame-bound quarterback who was one play shy of taking his National Football League team to the Super Bowl last season.

“Focus on the Family is not about focusing on the family – it’s about hate, and Drew Brees should have known that … or a regular joe standing in line for a Chick-fil-A sandwich,” a Chick-fil-A protester claimed, deriding Brees for supporting biblical values. “Racist, homophobic – it all overlaps. A lot of these people – they have a lot of the same values.”

Dr. Robert Jeffress of First Baptist Church in Dallas, Texas, indicated that if one does not toe the line today, he or she is fair game to be tagged a hater. Referring to the Last Days mentioned in the Book of Revelation, Jeffress impressed that while things are ultimately going to get worse before they get better,  there is no way of knowing if these latest struggles represent the final slide toward Armageddon – or if we’re still in a cycle.

“Something tells me we may be living in the last days, but as I often tell people, I’m 64 years old, and I know in the next 30 years, either Christ is coming to get me or I’m going home to meet Him,” Jeffress shared. “But the end is close for all of us, and we need to live our lives with that in sight.”

The Christian leader encourages Christians to keep fighting for the redemption of the culture until it is no longer possible.

We moderate all reader comments, usually within 24 hours of posting (longer on weekends). Please limit your comment to 300 words or less and ensure it addresses the article – NOT another reader’s comments. Comments that contain a link (URL), an inordinate number of words in ALL CAPS, rude remarks directed at other readers, or profanity/vulgarity will not be approved.

Not even CHRISTIANS take Christianity seriously 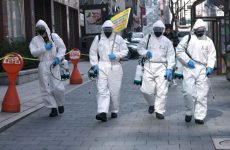