But just over two weeks since the opening of the 68-bed facility run by Franklin Graham’s organisation Samaritan’s Purse, questions are mounting over why the controversial religious leader viewed by many to be homophobic, Islamophobic and politically extreme was chosen to perform this vital role outside Mount Sinai hospital on Fifth Avenue, and who sanctioned it.

Graham, a close ally whom Donald Trump praised in a recent briefing, has previously described Islam as “evil” and has described gay people as “the enemy”. Coronavirus, he recently said, was a result of “the sin that’s in the world”.

Samaritan’s Purse – which has so far treated 130 coronavirus patients and has about 90 staff at the Central Park field hospital – requires all staff and volunteers to sign a “statement of faith”.

Statements in the document include “we believe that marriage is exclusively the union of one genetic male and one genetic female” and “human life is sacred from conception to its natural end”.

The decision to allow the group to run such a key Covid-19 effort in the city has drawn protests from both activists and politicians.

“His hostility towards LGBTQ people does not comport, in my opinion, with his desire to provide assistance and relief to New Yorkers during this time of crisis,” the New York state senator Brad Hoylman said. “That said, the federal government has put us in the unfortunate position of having to accept charity from bigots like Franklin Graham and at the very least I think it’s government’s responsibility to ensure that he follows the law.”

Hoylman has requested that the Mount Sinai hospital network ask Samaritan’s Purse staff to sign a non-discrimination agreement acknowledging their understanding of New York’s human rights law. But he still fears the organisation’s presence in the city will cause “incalculable” damage.

“I do fear that we’ve given Franklin Graham a platform in one of the most famous pieces of public land in the country to spew his hatred of LGBTQ people, and unfortunately at the same time legitimise his homophobia,” Hoylman said.

On Easter Sunday, Graham – son of the late evangelist Billy Graham – gave an Easter message from outside the Central Park hospital, broadcast on Fox News with the charity logo on a banner in the background.

Natalie James, a member of Reclaim Pride Coalition, which staged a protest outside the hospital on Tuesday, said: “Franklin Graham, their notoriously transphobic and homophobic leader of their organisation, had an Easter sermon right there in Central Park next to those tents, which I can only imagine was furthering their fundraising.”

Among those who spoke at the protest was Timothy Lunceford-Stevens, who said he was rejected as a volunteer by Samaritan’s Purse because he did not want to sign the statement of faith. James said the protesters were not necessarily trying to shut down the hospital – acknowledging that help was needed – but that the group wanted Samaritan’s Purse to drop the statement of faith, which they believe could be in violation of state and city human rights laws.

A group of US lawmakers from New York – including the Democrats Alexandria Ocasio-Cortez, Adriano Espaillat and Jerry Nadler – wrote a public letter warning of their “concern about the policies governing Samaritan’s Purse emergency field hospital in Central Park specifically, the implications for LGBTQIA+ New Yorkers with Covid-19”.

The letter, addressed to New York’s governor, Andrew Cuomo; the New York City mayor, Bill de Blasio; and the Mount Sinai Health System CEO, Kenneth Davis, called for answers to a series of questions, including details of the process that granted the charity use of public land, any non-discriminatory agreements in place and funding.

New York state approved the field hospital application. De Blasio has previously said that he found the organisation “troubling” but that Mount Sinai had assured him there would be no discrimination and that his office would be monitoring.

Espaillat, whose district includes Mount Sinai hospital, said he believes the situation has come about because the city is in “crisis mode”. He added: “Had it been any other time, this would have been a major scandal.”

Despite all the outrage, Graham, 67, told the Guardian in an interview on Thursday that he believed “the vast majority of New Yorkers are glad that we are there” and that the organisation would remain in Central Park for as long as it was needed.

The preacher, who lives in Boone, North Carolina, added: “It’s just a small handful of people who are opposed. And I find in life there’s always somebody who’s opposed to whatever you do and they’re just naysayers who disagree with our difficult positions and take exception to that.”

Defending the statement of faith, he said: “We are an evangelical Christian organisation and we want to have people of like mind.”

He said “a handful” of qualified people had been turned away because they could not sign the statement of faith, which he said was non-negotiable. “If they agree with it they’ll sign it, if they don’t agree with it then they move on. That’s just who we are and we’re not going to change who we are.”

But he insisted that all patients were treated the same “regardless of their sexual orientation, their race or their religion, it doesn’t matter”.

He also claimed he was not homophobic or Islamophobic, but added: “I certainly disagree with homosexuality and I believe the Bible’s very clear about what it has to say about homosexuality, and that’s my opinion and that’s what I believe, but I’m not anti-gay.”

Graham said the collaboration with Mount Sinai came about after the Federal Emergency Management Agency (Fema) found out Samaritan’s Purse had a spare field hospital in a warehouse and asked if the group would be willing to go to New York. He said Mount Sinai had got in touch with the organisation and soon after it began considering different locations.

He said Mount Sinai decided the tents should be in Central Park because of its “close proximity” to the hospital. He said the field hospital – including its equipment and staff – was entirely funded by private donations, adding: “We have no state, federal or city money.”

Fema did not respond to a request for comment. The New York state department of health spokesman, Jonah Bruno, said it had approved the application for Mount Sinai and Samaritan’s Purse to erect the field hospital in the park on a “temporary basis, until the governor’s emergency declaration is lifted”.

He added: “The department will fully enforce any and all applicable anti-discrimination laws and regulations against any healthcare provider operating in New York state.”

The New York City spokeswoman, Jane Meyer, said a member of staff from the mayor’s office checked in with staff of Mount Sinai and Samaritan’s Purse “every day to ensure things are running smoothly and they also visit the site in person”. But Samaritan’s Purse said they only came “on occasion”.

The Mount Sinai spokesman, Jason Kaplan, said: “While our organisations may have differences of opinions, when it comes to Covid-19 we are fully united: we will care for everyone and no patients or staff will be discriminated against. Mount Sinai and Samaritan’s Purse are unified in our mission to provide the same world-class care to anyone and everyone who needs it. No questions asked. Any suggestion otherwise is incorrect.” 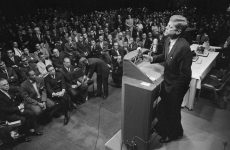 The Kennedy Speech that Stoked the Rise of the Christian Right