On a recent episode of The Bachelorette, lead Hannah Brown tells suitor and contestant Luke Parker, “I have had sex, and, honestly, Jesus still loves me.” (Jesus was not available for comment.)

Each season has a major turning point. Colton Underwood jumping the fence. Arie Luyendyk Jr. dumping his winner for his runner-up. Ben Higgins telling two women he loves them. And Brown’s signature moment—the thing fans will likely repeat back to her for years to come—seems to be her sex and Jesus declaration.

What she said is unlike anything we’ve ever seen from The Bachelor franchise. In years past, the show has danced around the topic of religion—or lack thereof—which is odd, considering that when picking a spouse in a matter of a few weeks, it’s sure to come up.

So why now? Brown certainly isn’t the first Christian to appear on the show. But she seems to be the first person the show has allowed to have religion as a main character trait on the show. During the first episode, cameras showed Brown praying, “Lord, bring me your goodness and your love… Help me feel worthy. Help me feel smart.”

Steve Carbone, aka Reality Steve, the blogger behind the website that spoils every season of The Bachelor franchise, thinks Brown’s religious background inspired producers to tell a new kind of storyline.

“When you’re 38 seasons and 17 years into a show, you kind of have to present new things that you just never have explored before to keep it fresh,” he says. “And I think when she said that, probably a lightbulb went off and they said, ‘Wow, we can build a major storyline around this.’”

It all seems to be contrived in a way, considering how during a recent episode, Parker—a devout Christian who took Brown to a Sunday School class on his hometown date—and three other men will head into the fantasy suites (where the lead has time with the contestants with no cameras around). Typically, only three men make it to that point in the season. Carbone says he believes this was intentional on the producers’ part.

“(The producers) probably set it up that way and were hoping for some sort of fireworks and they got it,” Carbone says. “I’m sure they had a reason to believe that if we put him fourth and the conversation of sex in the overnight comes up, he’s going to lose it if he finds out about her.”

Brown gave Parker the first impression rose on the first night and during Parker’s hometown date, he took Brown to a Sunday School class. But it seems the two view Christianity slightly different. Brown seems to be more liberal with her faith—choosing to have sex before marriage, and even “fucking in a windmill”—while Parker seems to be more traditional. He explained in his opening package that in college, he chased sex until one day while he was in the shower, he heard God speaking to him. No word on what God said.

Carbone says the only other franchise lead that he can remember with a strong faith is season 17’s Sean Lowe. But the show never mentioned his faith directly. Instead, when Lowe was on Maynard’s Bachelorette season, he told her they shared the same “values.” Audience members would later find out through Lowe’s social media that he is a born-again Christian.

In fact, in Lowe’s book, For the Right Reasons, Lowe writes that he still had questions about Catherine Giudici and her faith before he ended up proposing to her on his lead season of the show. “What did I really know about Catherine’s faith,” he writes. “Was she a Christian? Was she serious about faith?”

None of this was shown or discussed on Lowe’s season.

Ben Higgins, who was the lead on season 20 of The Bachelor, recently told a web series that he was jealous that Brown’s season featured faith.

“I’ll be honest, I’m a little bit envious and jealous of this season because faith is such an important thing in my life,” he said on the web series. “It is the reason why I am [who I am] today and a lot of the things I said and did don’t make sense without Jesus being at the center of it. So, I’m a little bit saddened it wasn’t part of my story. I am jealous.”

During season 19 of The Bachelor with Chris Soules as the lead, contestant Britt Nilsson explained in her opening package that she didn’t have sex in her previous relationship. “I think intimacy is so important, but I don’t want to start tapping into the physical part until I know the other pieces are there,” she said on the show.

“It is the reason why I am [who I am] today and a lot of the things I said and did don’t make sense without Jesus being at the center of it. So, I’m a little bit saddened it wasn’t part of my story.”

There was no mention of Jesus or God or faith or any reason why she might have these beliefs toward sex. It wasn’t until fans got to know her outside the show on social media that she was a devout Christian. She’s even said in a YouTube video that she went on the show because she “heard a yes from God.”

Brady Toops was a contestant on season 11 of The Bachelorette, where Nilsson competed for the lead spot against Kaitlyn Bristowe. When Bristowe eventually won and Nilsson was sent home, Toops chased her out of the mansion. They dated and the show featured segments with them throughout the season.

While the show did include a brief exchange between Nilsson and Toops about faith, Toops says he doesn’t think it’s a conversation the franchise has really wanted to dive into until this season with Brown.

The show certainly shied away from any mention of religion during Jef Holm’s hometown date in season 8 of The Bachelorette with lead Emily Maynard. When Holm took Maynard home to Salt Lake City to meet his family, his parents were “away.”

In Emily Maynard’s book, I Said Yes, Maynard writes that producers encouraged her to find out more about Holm and his religion. While he grew up Mormon, he wasn’t still practicing when he went on the show, but Maynard found his knowledge of the Bible attractive and even wrote in her book that she wondered at the time if Mormonism was a religion she could claim. None of this was mentioned on TV.

Toops thinks people who watch The Bachelor franchise are from middle America and probably evangelical Christians. He believes audiences will identify with Brown and Parker’s storyline.

“I think they’re showing different versions of Christianity and what the fruit of those versions is,” Toops says. “It’s interesting how Luke P.’s version of Christianity makes everyone hate him. And I’m not sure if that’s so much Christianity or if that’s a certain masculinity that has some kind of rigid, slightly legalistic Christianity attached to it. I think we’re definitely seeing how belief systems divide more than they actually can unite.”

Opinion: Christianity out of the barrel of a gun 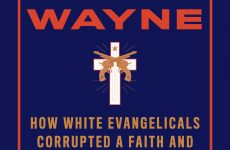