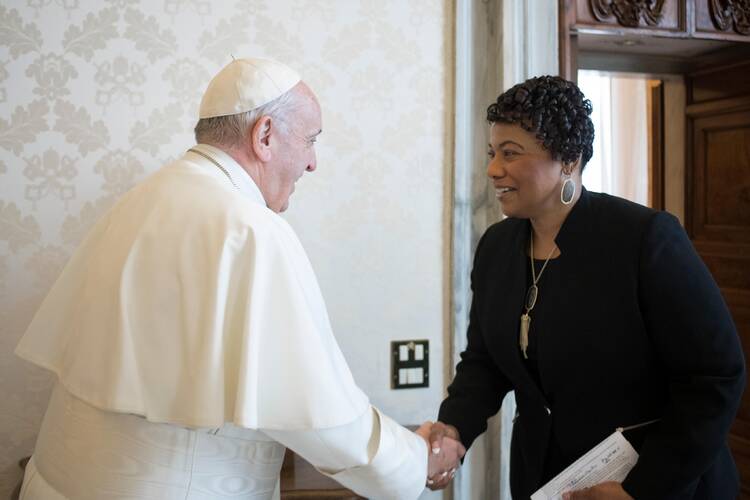 On “The Gloria Purvis Podcast,” host Gloria Purvis talks with Bernice King, the youngest daughter of Martin Luther King Jr., about how white Christians have responded to racist incidents, the concept of racial colorblindness and the New Testament roots of nonviolent resistance.

This transcript has been edited for length and clarity.

Gloria Purvis: How would you say Christian communities—all of us Catholics, evangelicals, Protestants—in the United States responded to the murder of George Floyd and the movement for racial justice since 2020?

Bernice King: Although I recognize that there are pastors and congregations across our nation who are involved in social justice work, I don’t think we’ve seen the likes of what my father lived in the ’50s and ’60s, where there were a number of pastors who coordinated and collaborated to attack segregation in the South.

I long for the day when we see a revival of what we saw in the ’50s and ’60s. And I’m not sure how that happens. But I know that it is necessary because I believe that there have to be people at the forefront who understand the importance of the power of God in tackling and attacking these evils and injustices that we are faced with.

There have to be people at the forefront who understand the importance of the power of God in tackling and attacking these evils.

GP: I wonder how much of it is that the type of racism that we face [today] doesn’t have that overt violence, like during the time of your father, my father, my grandparents. So people think, “Well, if it’s not that ugly kind of racism like that, then racism really doesn’t exist.” What do these responses reveal about our understanding of racism?

BK: I don’t think we have done a great job of helping [those in] the world who feel like they’re not impacted by racism to fully understand what it is. For some people, it is those ugly one-off acts. But for many of us, we understand it to be a much more complex systemic, institutionalized practice that has outcomes that greatly impact communities of color, especially the Black community. You can’t put your hands on that if you don’t live it or you’re not constantly exposed to it through some form of education or awareness campaign. So we have a lot of work to do, those of us who are conscious of what racism is.

GP: [We’ve] started to see the misuse of colorblindness, if you will, to tear down affirmative action. That’s not what your father meant when he talked about “I have a dream that my four little children will one day live in a nation where they will not be judged by the color of their skin, but by the content of their character.” And people have taken that to mean that you cannot see color whatsoever. How would you help us understand it?

BK: I think what he was saying is that we would live in a nation where there would be equity and equality and that a person’s skin color would not be the definer of access. I think people are really taking that totally out of context.

My father, when he was writing about racism in his book Where Do we Go from Here: Chaos or Community, ultimately [said] the answer to the race problem will be when men and women obey the unenforceable. The Bible talks about the laws being etched in our hearts. And so when they’re etched in our hearts, we behave differently.

Many times when we make change in this nation on any front, we don’t prepare people. We make a lot of assumptions that everybody understands: This is what’s fair. This is what’s just.

Many times when we make change in this nation on any front, we don’t prepare people. We make a lot of assumptions that everybody understands: This is what’s fair. This is what’s just. We never parallel it with conversations, preparation and education campaigns so that people understand it.

When the Montgomery bus protest ended, my father was very intentional about instructing individuals about what had happened. In other words, he said to them: “Look, this is not a win over white people. This is a win for justice.” We can’t be like, “Yay, we won,” right? Because this is new for them. They haven’t been accustomed to a certain way. So he prepared the people. We don’t do that today. We don’t talk people through these processes as we’re changing our laws.

How White Christians Can Empathize

GP: Throughout history, it seems as if Black progress or justice for Black people is perceived as a loss for white people. I was so shocked to see among many white Catholics, unfortunately, rage at this verdict [for Derek Chauvin] because they did not see a murder. And they saw [the verdict] as something that would harm the white community. What kind of interior work has to happen for people to [understand] that George Floyd was a child of God made in God’s image and likeness and worthy of dignity and respect, as is Derek Chauvin?

BK: Start from the outside in, by literally putting you in the shoes of these different scenarios. Put yourself in the shoes of George Floyd that day and process that in your psyche. You’re going to come across different thoughts that will emerge, and you’ll have to do an audit of all of these thoughts and ask critical questions. Is George any different than I am? How would I want to be treated if I was in those shoes?

We don’t allow ourselves to think of that person over there. We are disconnected. We hear things out here, but we don’t bring them inside of us for real.

I think we don’t do that enough. We don’t allow ourselves to think of that person over there. We are disconnected. We hear things out here, but we don’t bring them inside of us for real. That’s how I deal with the word of God whenever I’m dealing with Scripture. I don’t read it as something as a historical document, although I know it is. I allow it to come into me, and I try to allow myself to immerse myself in it.

GP: Black Protestant evangelicals have been noticing an otherness in these predominantly white churches in response to these human tragedies, and I’ve had that same kind of conversation with Black Catholics. What would be your advice to these Black Christians who may think they need to leave Christianity because of the lack of solidarity that they’re seeing from their other white Christians in their churches?

We cannot let our emotions overtake us, because we’ve got to be in a place to spiritually hear from God.

There may have to be an emergence of something new. I think there is a great falling away right now that is happening with the church as a whole. Because I really think something is on the verge. I don’t know exactly what that is. And I think people have to find each other that are in that state because I think that’s the critical mass collective that can bring the change. I think those are the kinds of people who are soul searching, who do take serious the word of God and the ways of Christ. And it’s going to take connectedness in order to address these serious issues. We’re at a critical juncture in our nation that if something new does not emerge, I’m afraid where we’re headed, personally.

We cannot let our emotions, particularly the emotions that can be more destructive or paralyzing, like anger and fear, overtake us, because we’ve got to be in a place to spiritually hear from God.

GP: I sometimes think people misunderstand nonviolence. They think that it’s this easy sort of passive thing, but it isn’t. Maybe you could talk a little bit about how that nonviolent response is rooted in your understanding of Christianity.

BK: You know I think Jesus has made his word clear. When he said, love your enemies, he didn’t put any conditions there. Jesus commanded us to love our enemies, to do good to them that hate you. That’s the part we skip over. And I hear people say, “Love is bless the one who curses you and pray for them,” but we don’t talk about the do good to them that hate you. We have to commit ourselves. The first thing a person has to say is, “Am I truly committed to the way of Christ?” I think that’s what every person who says they are Christian, Catholic, a follower of Christ has to do.

And I don’t mean rhetorically. I mean, seriously going through the thought process and saying, “Am I committed to it? And am I willing to sacrifice my entire life to follow it? The development of the discipline comes out of that process. It’s an everyday process. Nonviolence is not easy. It is a discipline, but it’s a discipline that comes out of that space of the Sermon on the Mount.

GP: I talk a little bit about some comments that the Holy Father made regarding your father at a special joint session of Congress in 2015. [Pope Francis] held up your father. He said: “I think of the march Martin Luther King led from Selma to Montgomery 50 years ago, as part of the campaign to fulfill his dream of full civil and political rights for African-Americans. That dream continues to inspire us all.”

What is your reaction to the Holy Father holding up your father and his dream as something for our country?

BK: I think when he lifted it up, he actually lifted it up as a dream for our world because of who he is. You know, this is the aspiration of people all over the world. Certainly when you think about that day, when [my father] stood there, he was really making a prophetic declaration to us, and many of the things that he spoke before and spoke after and wrote before and after kind of culminate in and out of that moment. It was like a proclamation of what the kingdom of God should be like on the earth. And so I think it was apropos for him to lift that [up] in this nation as the pope, but also in this nation that is a microcosm of the world in many respects.

At the end of the day, we are all called to follow the way and example of Christ and their archetypes. Martin Luther King was an archetype of Christ. He was someone in our vicinity of time. Most of us didn’t know him and weren’t born, but it’s the closest thing that we have to that kind of archetype who sets an example for the rest of the world.

For Cosmopolitan Christians, Secular Approval Is a Common Temptation