Christianity and the Environment

In 1967, historian Lynn White Jr. argued that Christian beliefs promoted the domination and exploitation of nature, and therefore were incompatible with environmentalism. Almost half a century later, polls showed that fewer than 50% of all U.S. Protestants and Catholics believe the Earth is warming as a result of human actions.

There are notable exceptions, such as Pope Francis, who called for action to slow climate change in his 2015 encyclical, “Laudato Si’.” Another prominent advocate for action is U.S. climate scientist and evangelical Christian Dr. Katharine Hayhoe. A growing number of Christians are joining the Creation Care movement, which combines Christianity and the environment. But as recently as early 2018, they were outnumbered by Christian climate skeptics.

Christians hold a diverse range of attitudes about the environment. I divide them into three categories – separators, bargainers, and harmonizers – based on my study of religious organizations (The Cornwall Alliance, The Acton Institute, and The Evangelical Environmental Network), and interviews I conducted. I chose these three groups because they exhibit primary characteristics of the three categories.

Separators believe that faith and the environment are at odds. They tend to think environmentalism threatens their faith. One separator who I interviewed argued that climate scientists use “good causes to further evil agendas.” This person thought environmentalism was an evil force.

Bargainers adopt some aspects of environmentalism, but reject or modify others. One bargainer I interviewed said, “The climate is changing. It’s been changing for millions of years and will continue to do so.” This person changed the definition of climate change to fit the belief that climate change is natural and nothing needs to be done to address it.

Harmonizers see environmentalism as an important part of being a good Christian. Although they are not climate skeptics, they may or may not actively engage in the environmental movement. One harmonizer I interviewed said that environmentalism “begins on an individual basis.” Another argued that you only “have control over your individual actions.”

Harmonizers sometimes limit their environmentalism to personal behaviors. Most of the harmonizers I interviewed did not call for political or public action to solve climate change. 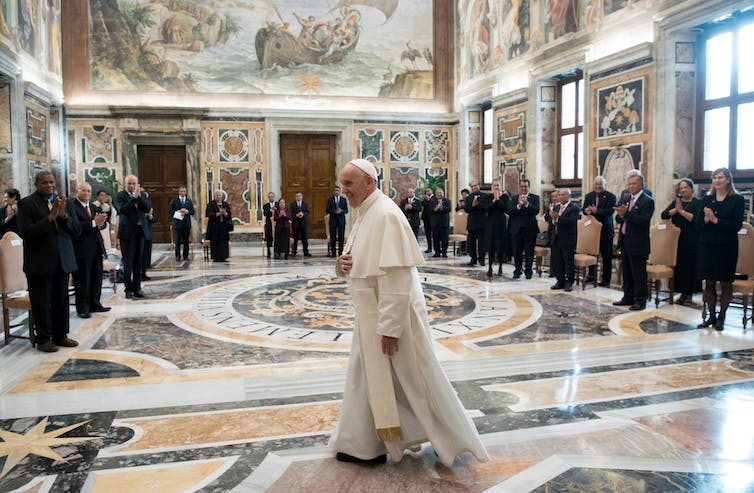 Pope Francis is an example of a climate harmonizer. In 2017, he told these South American leaders that he worries about sea level rise. L’Osservatore Romano/Pool Photo via AP

In my book I explain tailored ways to engage with Christians about climate, and offer the following three strategies as starting points for all climate conversations. I advocate that conversations with separators and bargainers should focus on changing environmental beliefs, while discussions with harmonizers should encourage them to take more environmental actions.

Since there is overwhelming evidence that climate change is real, it may be tempting to act confident and even arrogant when discussing it with skeptics. But our conversation partners will pick up on those nonverbal cues. Communication scholar Richard Johannesen asserts that audience members can tell whether a speaker sees them as equal, inferior, or superior. People who expect to receive trust, good will, and attention should offer those qualities themselves, even when they disagree with perspectives of others.

Research shows that connecting climate change to people’s values is an effective way to gain their attention. For example, there is evidence that using “broker categories” – topics that are distinct from but related to the environment, such as technology and the economy – fosters positive attitudes toward the environment.

For example, instead of arguing that people should support pro-environmental policies because they will protect natural resources, it may be more effective to argue that such policies create jobs.

Scientific evidence can strengthen an argument, and some studies show that people largely change their views on climate change due to what the science says. But other studies have found that this is not always true.

In some cases, exposure to scientific facts causes people to double down on their previous held beliefs – a response also known as a boomerang effect. Accordingly, I encourage people not to rely solely on science in climate conversations.

The importance of engaging

Every Christian I spoke to for my research, even the separators, said that they valued the environment, even if they disagreed on specific policies. And for the most part, they were willing to speak with me about climate change even though it was a controversial topic.