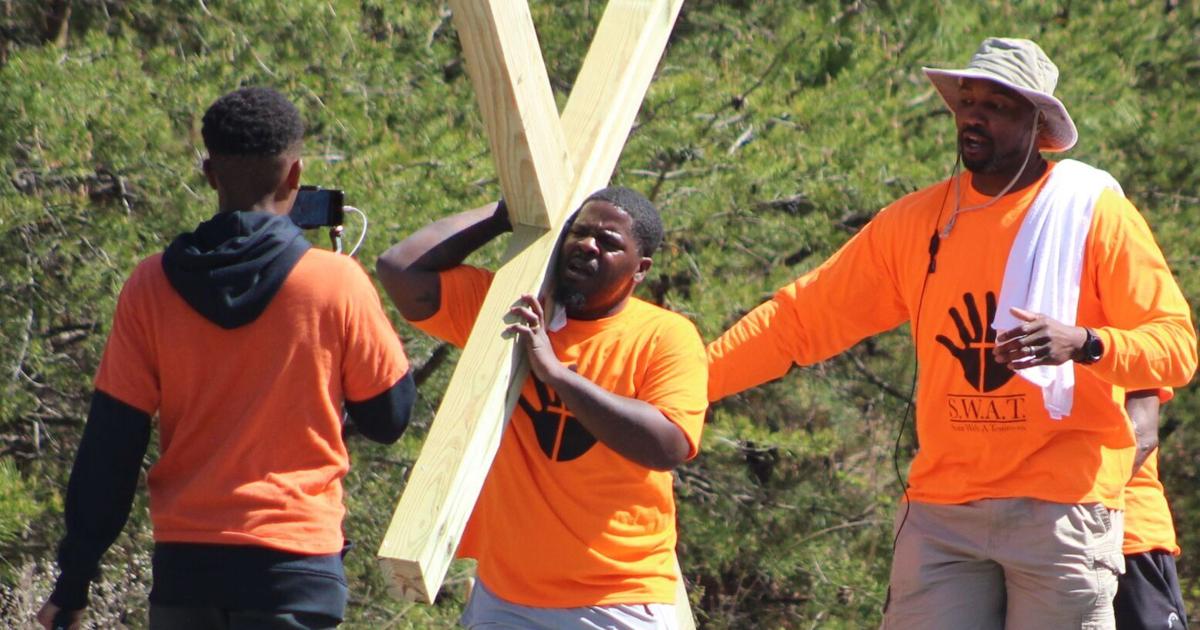 NORTH EAST — Twelve feet tall and 200 pounds and every man from Restoration Tabernacle’s Sons With A Testimony took a turn carrying the cross on Good Friday.

Starting at the parking lot of the North East barrack of Maryland State Police the men’s group from the church on Pleasant View Road in Port Deposit began walking along Route 40 heading to Perryville to make the turn onto Route 222 and head toward their congregational home.

This was the seventh year the church hosted the Cross Walk to commemorate the crucifixion of Jesus Christ by Roman guards. In the Biblical book of John, it indicates those soldiers forced Christ to carry the cross the the place where he would die.

“So the soldiers took charge of Jesus. Carrying his own cross, he went out to the place of the Skull (which in Aramaic is called Golgotha). There they crucified him, and with him two others—one on each side and Jesus in the middle.” (John 19:16-18)

A pivotal moment for Christians during Holy Week, Christ was beaten nearly to death then forced to carry the cross up a hill and was nailed to it. He was buried in a borrowed tomb before sunset and then rose from the dead Sunday morning. That resurrection, for Christians, means new life is possible for those that believe.

“We had a guy delivering pizzas who just jumped out,” he said of one visitor along the way. “Two or three years ago Brother Jeff Phillips saw us and parked his car and joined us. He walked three or four miles before he realized he’d left his car.”

Phillips remembered that day as he prepared to take yet another turn carrying the cross.

“I was going through something really tough in my life,” Phillips, from Earleville, said. Seeing the group led by a large wooden cross he had to respond. Since then his life has completely turned around, he added. “It’s pretty miraculous.”

This year a couple saw the Cross Walk as it drove past and made a U-turn.

“They said, “We’ve got to take a picture of this,” Cevis said of the visitors.

There’s no wheel on the bottom on the cross to make the going easier. When their turn came, each bearer would heft the heavy lumber onto his shoulder and drag the cross his appointed distance; a half mile. If it were not for the men singing praise songs one could hear the ominous dragging sound.

While it was the men who carried the large cross, Cevis said it was one of the youngest among them who felt she had to join.

“When we stopped at Food Lion my granddaughter found a couple of stakes and made her own cross,” Cevis said. Naomi Taylor, 5, carried her cross the rest of the route.

Cevis remarked on how grueling the Biblical bearing of the cross must have been.

At least the weather cooperated this year, with bright sunshine and temperatures hovering in the low 70s.

“We got snowed all over in 2020,” Cevis recalled. “It snowed on us like you wouldn’t believe.”

The sixteen men made it to their church just after 3 p.m. Cevis said next year he would like to make the Cross Walk a relay of sorts involving other churches.

Does Christianity transcend all our political disagreements? 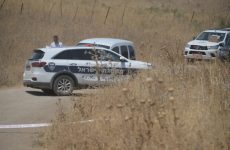 Man charged with murdering mother because she converted to Christianity 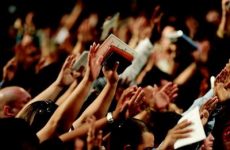