“The Holy See considers that, along with a living memory of what happened in the past, interreligious dialogue is an indispensable tool to combat anti-Semitism,” he said Nov. 19, during an online symposium on the global rise of anti-Semitism.

The aim of this dialogue, he added, is “to promote a commitment to peace, mutual respect, the protection of life, religious freedom and the care of creation.”

“The Holy See condemns all forms of anti-Semitism, recalling that such acts are neither Christian nor human,” he said, and it sees any form of anti-Semitism by a Christian as “a rejection of one’s own Christian origins and, thus, a complete contradiction.”

The cardinal was one of the speakers at the symposium organized by the U.S. Embassy to the Holy See, titled, “Never Again: Confronting the global rise of anti-Semitism.” The event was streamed live on Facebook.

Callista Gingrich, U.S. ambassador to the Holy See, said the symposium offered a chance to discuss “the importance of Holocaust remembrance and education and to share best practices for confronting the rise of anti-Semitism around the world.”

Inviting Catholic and Jewish scholars and political experts to speak, she said it was important the different sides “come together today to reaffirm our commitment to fight anti-Semitism” and remember that “through dialogue and cooperation, across governments, faith communities and civil society, we can confront and overcome this unspeakable evil.”

Elan S. Carr, the U.S. State Department’s special envoy for monitoring and combatting anti-Semitism, said the three main sources of anti-Semitic hatred and violence today are coming from: “the far right. These are the ethnic supremists who hate everyone”; “the far left,” who are opposed to Israeli statehood; and “militant Islam.”

In addition to defensive measures such as enacting laws and policies that guarantee people’s physical safety and levy stronger punishments against hate crimes, Carr said proactive measures are needed, too, specifically in education.

“Can we tell the history of western civilization or of the countries in which we find ourselves,” without talking about the “the profound and beautiful and indelible contributions of the Jewish people,” including their contribution to the values “we today take for granted,” he asked.

“To combat anti-Semitism we have to promote a philo-Semitic narrative that embraces and educates in our Abrahamic principles that bring us here today and animate our work,” Carr said.

Lisa Palmieri-Billig, representative of the American Jewish Committee in Italy and liaison to the Holy See, said two-thirds of Americans under the age of 40 did not know that 6 million Jews were killed in the Holocaust and almost 50% could not name one concentration camp, according to a survey commissioned by the Conference on Jewish Material Claims Against Germany, which was published in September.

Conspiracy theories, which can be quickly and widely spread on social media, also continue to target Jewish people with stereotypes and blame, she added.

When the Second Vatican Council finally discredited and disavowed anti-Jewish sentiments and accusations of deicide, the legacy still “left indelible imprints in the history of Europe,” she said. Religious and secular leaders also tapped into that lingering hatred whenever a scapegoat was needed to blame and punish for their failures to address social and economic crises.

“Today we have the support and the consciousness of the rulers of democratic countries and of the Catholic Church,” Palmieri-Billig said.

Rabbi David Meyer, a lecturer at the Cardinal Bea Center for Judaic Studies at Rome’s Pontifical Gregorian University, said the Vatican II document, “Nostra Aetate,” on the church’s relationship with other religions, “proves that anti-Semitism can be defeated and that hearts can be turned.”

That document and the many fruits borne from it, are a “very significant but powerful ray of light and hope,” which transformed “teaching of contempt into teaching of respect.”

That successful battle can inspire and give practical insight into “how to renew our battle against anti-Semitism” today, he said.

Suzanne Brown-Fleming, director of international academic programs at the U.S. Holocaust Memorial Museum in Washington, D.C., said the first step is education and study into “what happened” in the past.

While greater understanding “does not inoculate against anti-Semitism,” she said, it “can mitigate its lure.”

Next, analysis is needed, she said, the “why,” the motives and pressures, which either pulled people into collaborating with Nazi persecution, lulled them into inaction or compelled them to help their Jewish neighbors.

The third step then is “to close the gap between the them and the us,” she said. People need the courage to see themselves “within that very human spectrum of behavior the Holocaust surfaced: from killer to rescuer and all the gradations in between.”

The museum’s work is meant to inspire people to reject hatred and promote human dignity, and provide “a powerful lesson in the fragility of freedom, the myth of progress and the need for vigilance and preserving democratic values,” she said.

How QAnon Conspiracy Is Spreading In Christian Communities Across The U.S. 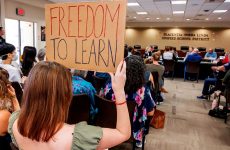