Fawza Umri helps her son put on clothes after being bathed inside their tent at Atmeh camp, near the Turkish border in Syria, June 13, 2020. Humanitarian groups have accused Turkey of “weaponing water” in the northeast region of Syria. (Credit: Khalil Ashawi/Reuters via CNS.)

AMMAN, Jordan — Parts of Syria’s north where Kurds, Christians and Yazidis have practiced religious freedom in recent years are reportedly again under attack by mainly Turkish military and their allied Syrian Islamist fighters.

The Syrian Democratic Council, which oversees the autonomous northeast of Syria, condemned Turkey’s cutting off the water supply to the area’s main city, Hassakeh, for nearly four straight weeks. Humanitarian groups have repeatedly accused Turkey of “weaponizing water” since its military takeover of the region in October 2019.

The council warned that Turkey is risking hundreds of thousands of lives in the midst of the coronavirus pandemic and soaring temperatures.

“Turkey has cut off water from reaching the city of Hassakeh and the surrounding countryside, which is home to more than a million people. This is a crime against humanity,” Gabriel Shamoun, the council’s vice president, told Catholic News Service. A Syriac Christian, Shamoun is also Syriac Union Party official.

One resident, who only provided his first name, George, said wells on the outskirts of the city required about 12 days to fill up the reservoir, and only then could water be distributed. The man said he had already lost several relatives to COVID-19.

Turkey and its Syrian militant allies cut off the vital supply of water from the Alok pumping station Aug. 13 for the eighth time since they invaded and took over the Ras al-Ain area in October, observers said. They added that the measure is choking the inhabitants of the region’s main city, Hassakeh, with the hope of trying to force its inhabitants into submission.

This pumping station provides drinking water for around 800,000 people and is also the main source of water for tankers supplying potable water to tens of thousands of inhabitants. However, Alok was rendered inoperable during the Turkish invasion, and service has been only partially restored.

Withholding water is a similar tactic used by Islamic State militants in northern Iraq, when they cut water supplies to Qaraqosh and other towns of the Ninevah Plain before their 2014 invasion.

The Al-Himme pumping station nearer to the city only covers less than one-third of people’s needs, according to UNICEF. A number of times, the U.N. children’s agency has warned that if people are forced to rely on unsafe water from shallow wells, children and others face increased risk of waterborne diseases. Tankers transporting potable water are expensive and beyond many people’s financial means.

Shamoun urged the U.S., the United Nations, and Russia, the Syrian government’s main backer, to pressure Turkey to pump water to Hassakeh, saying Turkey was using water as a “provocation” against the autonomous region.

Kurds and Syriac Christians from this area have been America’s chief ally in fighting Islamic State militants in Syria and ending its territorial caliphate. The U.S. troop pullback in October and subsequent Turkish offensive has raised fears of an Islamic State resurgence.

“Using water as a weapon — which is not the first time — is a barbaric act and a flagrant violation of fundamental human rights. Yet, there has been no response from the international community to this atrocity, despite the constant appeal of the people of the region,” he wrote in an Aug. 21 letter to U.N. Secretary-General Antonio Guterres.

People in Afrin as well as in the autonomous northeast had the ability to choose their own faith and religious beliefs until militant Islamists working with the Turkish military invaded Afrin in January 2018.

Since then, Christians, Yazidis and other religious minorities have been persecuted; Their homes, businesses and properties have been taken over by the troops, and many have been forced to flee. However, those who converted to Christianity face particular danger from the Islamists. 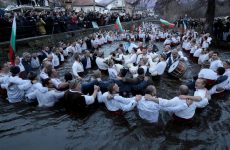