If Offill had fashioned the entire book out of nothing but this correspondence, “Weather” would still be terrific. She didn’t, of course, and “Weather” instead follows the structure of Offill’s breakout 2014 novel, “Dept. of Speculation,” which involves a woman’s attempt to make sense of her unraveling marriage through philosophy, art and riddles. That book also told its story via a series of short, bracing paragraphs — many of them a single sentence or two — that easily could stand alone as tiny, Lydia Davis-like stories. In “Weather,” Offill delivers paragraphs such as this one:

“It is dusk when Henry and I leave the park. A car nearly runs us over. Now we’re right next to her at the light. My brother goes up to the window. ‘Lady you almost killed us,’ he tells her. But she won’t look at him. ‘You and your precious lives,’ she says.”

That paragraph is bookended by a riff on the word “enmeshed” and an uncomfortable encounter with the owner of a hardware store. “ ‘If you want Home Depot, go to Home Depot!’ he says.”

None of this hopscotching feels random. Offill is in total control here, and all the asides, jokes and Q&As reflect the fraying state of Lizzie’s mind as her concerns over the climate crisis, the Trump administration, pernicious algorithms and other man-made threats intensify. Lizzie’s predicament, and the real question at the heart of this novel, is how she is supposed to prepare for the end of the world when day-to-day life itself is so maddening.

Lizzie’s frustrations are many, and they vary in size and scope, from the bullhorn-wielding woman who monitors the student drop-off at her son’s elementary school to her fear of dentists and her husband’s decision to go “glamping” for three weeks with his sister despite the “coming chaos.” That she catches her son watching a video about a sex robot and her husband reading the Stoics before breakfast are also of some concern.

The biggest thing keeping Lizzie from becoming a full-on doomsday prepper is her dedication to her brother, Henry, a recovering drug addict, new father and experienced catastrophist. Whereas most of Lizzie’s anxieties are rooted in real-world concerns, Henry’s fears are wild and irrational. He worries that he sold his soul to the devil as a child but can’t remember doing so. Afraid he might accidentally harm his infant daughter while giving her a bath, he washes her with a squirt gun. Henry hides this side of himself — what Lizzie calls “that looping thing he does” — from everyone but his sister, a burden that has the effect of tethering her to reality instead of yanking her from it. “Just give me time to stabilize Henry,” Lizzie implores her husband, even though they both understand that time is limited.

Would more of it make a difference? It’s another question with no clear answer, yet one Lizzie is compelled to ask. “I keep wondering how we might channel all of this dread into action,” she thinks. Again and again, she comes up short, but for all her fretting about humanity’s current existential emergency, Lizzie never succumbs to hopelessness. Neither does Offill. “Weather” is too sharp a book to allow for pessimism or apathy. There is simply too much to be done, and there are too many people to care for and about, the novel argues, to not work through our deepest fears and fight our way past this crisis.

And if that doesn’t work, well, like Lizzie, we can take comfort in at least one thing:

“The moon will be fine, I think. No one’s worrying about the moon.”

Jake Cline is a writer and editor in Miami.

Column: Negative image of Christians can be combatted by loving widely, deeply 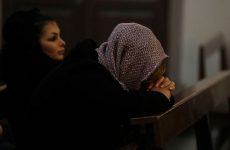