President Donald Trump has spent the past 24 hours trying to send a message: He is the law-and-order president, and he has the support of American Christians. First came his waltz last night through the White House gates and across Lafayette Square, where protesters had just been dispersed with tear gas and rubber bullets. Trump posed, stone-faced while clutching a Bible, in front of St. John’s Episcopal Church, which was set on fire during protests on Sunday night. This morning he visited the Saint John Paul II National Shrine, solemnly holding hands with the first lady before a larger-than-life statue of the wildly popular pope.

Some of Trump’s supporters applauded these gestures. “By holding up the Bible, he was showing us that it teaches that, yes, God hates racism, it’s despicable—but God also hates lawlessness,” Robert Jeffress, the pastor of First Baptist Dallas and a vocal supporter of the president, told my colleague McKay Coppins on Monday night.

But progressive clergy, including those who lead St. John’s and other Episcopal churches, instead felt rage.

The president’s visit to St. John’s “did not bring any healing. In fact, it’s caused great division,” Michael Curry, the presiding bishop of the Episcopal Church, told me in an interview today. “That Bible that the president held up—it might have been helpful if it were opened.” In a statement, Archbishop Wilton Gregory of the Roman Catholic Archdiocese of Washington went even further in condemning Trump’s visit to the shrine of John Paul II: “I find it baffling and reprehensible that any Catholic facility would allow itself to be so egregiously misused and manipulated in a fashion that violates our religious principles.” The late pope “certainly would not condone the use of tear gas and other deterrents to silence, scatter, or intimidate [human beings] for a photo opportunity in front of a place of worship and peace,” he added. Both Gregory and Curry have the distinction of being the first black leaders to hold their respective roles.

Over the past week, as Americans have grieved the killing of George Floyd by police in Minneapolis—and the country’s long pattern of deadly racial violence—clergy of many religions and denominations have joined the ranks of protesters nationwide. They show up to march and yell, to hand out granola bars and water bottles, to open the doors of their churches when protesters’ eyes are burning from tear gas. Many of those same clergy are now filled with anger that, as they see it, the president is using the places where they worship as mere political props.

A large number of American Christians, a significant majority of whom are white, actively support Trump, and have been buoyed by his recent actions. But others feel called to stand in firm opposition to the president—including his rhetoric dismissing protesters and his calls for police violence against them. According to a Morning Consult poll conducted on Sunday and Monday, only 43 percent of evangelicals believe Trump has handled the George Floyd protests well, and that number is even lower among Catholics and people of color. Predominantly white Christian denominations, including that of the Episcopal church where Trump posed on Monday night, long accommodated themselves to racial violence and white supremacy, Stephanie Spellers, the canon to Presiding Bishop Curry, told me. And “we do not want to be that Church anymore.”

“The Episcopal Church was the church of the colonizers. At various points in American life, we have been the Church that stood with the powerful, with the slaveholders, with the industrial managing class as they oppressed working people,” Spellers said. In recent years, the church has tried to repent for that legacy. This past week, roughly 100 Episcopal pastors have gathered with clergy of other denominations to aid protesters in D.C., Daryl Lobban, the pastor in charge of racial-justice issues for the Episcopal Diocese of Washington, told me.

Shortly after 6 o’clock last night, Glenna Huber, an Episcopal pastor and the rector of the Church of the Epiphany in D.C., told me she was just leaving St. John’s, where she had been handing out supplies to protesters. As the National Guard began to roll by, she and a colleague hurried to their cars two blocks away. As police sirens began to go off, she thought, “I’ve got to get out of here.” Everyone she was with left the area safely, she said, but they felt a lot of anger.

“I don’t think there’s anything in the scriptures that would support the role of the faithful aligning with the National Guard around this,” she told me. “Jesus has always stood with the oppressed. If I’m going to stand publicly wearing the banner, visibly, of Christianity, then I must be standing with the oppressed.” Meanwhile, Trump stood in the Rose Garden and condemned the “riots and lawlessness” happening around the country.

[Read: This is how Trump wants to be seen]

Martin Luther King Jr.’s “Letter From Birmingham Jail,” published in The Atlantic and several other outlets in 1963, was partially addressed to Episcopal clergy who had urged “law and order” amid the civil-rights protests. Today, Episcopal leaders have been working to change this legacy of complacency with racism and to stand against white supremacy. “We have to say now: That is who we have been. That is not who we want to be,” Spellers said. For Trump “to drag us back into that—into that identity—was incredibly hurtful. I actually think that was a lot of the anger that you were seeing.”

The past week has been immensely painful for the country. The division among American Christians is just one more layer of grief. “For anyone, especially other Christians, who feels like, Are we still in the same Church?, I would simply ask them: Please come back to the way of love,” Spellers said. “Following in Jesus’s footsteps does not lead us onto the path that this president has laid out.” 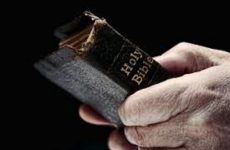 Christianity is not a brand or a demographic

The power of prophecy – Jackson Sun