JD: One week after Holocaust Remembrance Day, Independence Day the celebration of the 73rd birthday of the Jewish State of Israel. That’s another very special day to Jewish people isn’t it?

WM: Yes of course. It is in fact the opposite end of the pole of Holocaust Day. We are free. We are liberated. We’re able to have an army, a government, a judiciary and that’s the way it should be. A family of nations. One nation earning the respect for what we were able to do. And so therefore one week after Holocaust Day we enter into Independence Day with joy and with celebration.
JD: Winkie, this morning I was reading in my quiet time Isaiah 42:6 where it says that Israel will be a light onto the nations. And indeed Independence Day marking I do believe at least partial fulfillment of what God promised the Jewish people a land where all the Jews could come and live and a kingdom in the future. Fulfillment of prophecy, nothing better than tangible evidence and that’s what Independence Day is. Do you not believe that?
WM: I do believe that. If I may be proud of Israel this past year our performance during the Covid-19 crisis and our ability to overcome to a great extent this pandemic and to show the nations of the world a proper way out of it I think is admiral and is Biblical and its proportions of man kind confronting a global crisis with belief in ourselves that of course comes from the Bible and its prophecies about what Israel is to be to the nations of the world.
JD: Winkie Medad with the details on Israeli’s 73rd birthday, a fulfillment of Bible prophecy.
We report this information because it is setting the stage for Bible prophecy to be fulfilled.
May 14, 1948 marked the day that God fulfilled His promise to the Jewish people and made a Jewish nation with these Jews which had survived the Holocaust of World War II. World War I prepared a land for a people and World War II prepared a people for that land. That was a fulfillment of Ezekiel chapters 37 & 34. The ancient prophet Ezekiel also foretold of an alignment of nations trying to destroy the Jewish State, that’s Ezekiel 38. One prophecy has been fulfilled the other is about to be fulfilled.
No comments
Share: 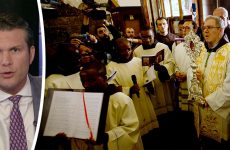