The son of pastor Douglas Wilson of the controversial Christ Church in Moscow, Idaho, and a close associate have made significant inroads into mainstream culture in America with a successful streaming cartoon based on a book published by the church’s own imprint.

The Guardian has previously reported on how the church, which aims to create a theocracy in the US, has increased its power and influence in its home town, while also campaigning vociferously against efforts to curb the coronavirus pandemic. Those developments come amid a broader rise in the right wing across the US.

At the same time Christ church is seeking to use television and book publishing to enter US popular culture and promote its interests.

Wilson’s son Nathan Wilson and his manager and close associate, Aaron Rench, have simultaneously been attempting to crowdfund a creationist nature documentary starring Douglas Wilson’s brother, Gordon, and have continued to market young adult fiction through a mainstream publisher.

They have also entered into complicated financial arrangements which appear to divert money to a troubled charity associated with Christ Church and silently taken control of a number of Christ Church-associated businesses through LLCs which have limited legal and financial reporting obligations.

The revelations raise further questions about the way in which the church and its local empire of associated institutions are run, and the extent to which it has succeeded in embedding the church’s fundamentalist, theocratic teachings in the products of major media conglomerates.

Guardian investigations have shown how Christ Church has accumulated power, concentrated in the hands of Douglas Wilson’s family and a small number of other individuals.

The relationship between Nathan Wilson and Rench is evident across a sprawling and lucrative enterprise which incorporates publishing, media production and real estate.

Wilson, writing as ND Wilson, is the author of a number of bestselling young adult and children’s books. Some of these are published with a church-aligned publisher, Canon Press.

But most are published with mainstream publishers, including two trilogies and two standalone books with Penguin Random House and one trilogy with Katherine Tegen Books, an imprint of Harper Collins.

Rench, who is a member of Christ Church along with his brother, Gabriel, serves as Nathan Wilson’s literary agent through his own Leaptide Literary group.

More recently, however, the pair have branched out into media production.

This year saw the fourth season of an animated children’s program, Hello Ninja, screened on Netflix. The series is based on a picture book authored by Wilson, and published by the children’s imprint of Christ Church-aligned publisher, Canon Press.

The books, and the series, depict children who transform into ninjas and enter a magical kingdom.

Previously, along with other adaptations of ND Wilson books, GPP has produced culture war documentaries centred on Douglas Wilson.

In 2009, GPP and Rench produced Collision, which chronicled a series of debates between Wilson and the late writer and celebrity atheist Christopher Hitchens.

Then, in 2015, another film, The Free Speech Apocalypse, chronicled events at Indiana University in 2012 when students and others protested against a Wilson speech on the grounds of what they saw as his homophobia.

More recently, Rench and Wilson have been seeking crowdfunding for a nature documentary series, The Riot and the Dance, which is set to showcase the creationist views of Gordon Wilson – Nathan’s uncle, Douglas’s brother and senior fellow of natural history at the Christ Church-aligned college New Saint Andrews.

Kristin Du Mez is professor of history at Calvin University and author of Jesus and John Wayne, a critical history of white evangelical Christianity in the United States, which includes scrutiny of Douglas Wilson’s leadership of Christ Church.

Asked about Wilson’s publishing and media enterprises, Du Mez said: “Conservative evangelicals have a long history of advancing their religious and political values through popular culture.”

She added that evangelicals produced media for other evangelicals seeking to shield themselves and their families from the “corrupting influences” in secular culture. As a result, Du Mez wrote that “it’s always good to follow the money”.

“Since there is a captive market that has been told to distrust ‘secular’ culture, there is a lot of money to be made in producing religious-themed products, particularly those aimed at conservative audiences,” Du Mez concluded.

In an SEC filing which describes the crowdfunding effort, the rationale for the series is laid out.

“For too long nature documentaries, a multi-billion-dollar sector in the entertainment industry, have been completely controlled by groups who do not believe in a divine creator,” the document says.

The documents show that while all of the production costs will be raised from crowdfunding patrons, who will receive equity and a share of profits in the case of a successful production, Wilson and Rench have been allocated over 90% of voting shares in the company after making no cash contribution.

Nathan Wilson did not respond to a request for comment.

Netflix declined to comment on whether they were still in partnership with Wilson and Rench, or the nature of any partnership. 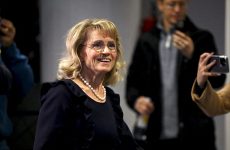