As the 4th of July approaches my mind is drawn to our country and how to best help it. Like many of you, I am an American by birth and a Christian by grace. How does a Christian, a citizen of a heavenly, eternal kingdom bless the temporal kingdom or nation where he has earthly citizenship? I think of a man in my church named Rod. He is a citizen of Peru by birth and a citizen of the U.S. by choice. At 28 years of age he joined our country as a naturalized citizen. He took the vow which demanded that he defend our constitution and laws against all enemies, foreign and domestic, agreeing to take up arms if required. He made a serious commitment to bless his adopted nation, even serving in the American military.

The first way Christian citizens can bless America is to pray for our nation. We have the privilege of having the ear of our creator; the God who can speak forth the universe, the one with the ability to do what we consider impossible whenever he wishes. When Moses and the Jewish people found their nation under the heel of Egyptian slavery, prayer was the first step in their remarkable journey to freedom.

Second, Christian citizens can genuinely serve their community and country. As I look around the Fairbanks Christian community, I get the honor of seeing Christians feeding the hungry, visiting the prisoners, opening their homes to foster children, offering practical help to the homeless, walking alongside women in crisis pregnancies, and adopting the abandoned.

Third, Christian citizens can be flesh and blood examples of the way forward in spiritual growth through repentance. I appreciate the story that comes from 1777 when the Revolutionary war was not going well for America. In a meeting, Dr. Rush (essentially our first surgeon general) leaned over to his friend John Adams (eventually the 2nd U.S. President) and asked directly, “Can we actually win?” John Adams said, “Yes, if we fear God and repent of our sins.” None of us like to acknowledge our brokenness and sinfulness, but Christians can model relationships that go deeper than the typical veneer of modern culture. Vulnerability is profound and it is a gift we can offer an airbrushed, social media driven society. Real authenticity is refreshing when you encounter it, and the Christians I know exemplify it. Christians do not serve America best as some sort of “moral majority” but are most effective as a repentant minority.

Let me close with a passage that I often come back to as a good summary of how believers can bless their nation. 2 Chronicles 7:14 states: “if my people, who are called by my name, will humble themselves and pray and seek my face and turn from their wicked ways, then I will hear from heaven, and I will forgive their sin and will heal their land.” 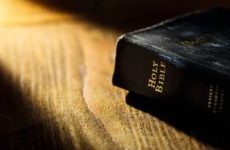