Good Friday is a day when Christians remember Jesus Christ’s death on the cross — his execution upon an instrument of state torture.

It is also a powerful reminder of how dangerous it is for society when authoritarian politicians and corrupt religious leaders conspire for power and dominion.

Good Friday’s warning resonates deeply even now, nearly 2,000 years after Jesus’ death. That’s because the relationship between the religious authorities of Christ’s time and the brutal Roman governor who ordered his execution, Pontius Pilate, is little different from the Christian nationalist bond that exists between today’s Republican Party and conservative American Christianity.

Regional Roman dictators like Pilate relied on local religious elites to help them build power by keeping order within their jurisdictions. In exchange, the religious leaders were allowed to keep power and status. Everybody benefitted — except for critics like Jesus, the poor, and the oppressed.

Eager to bask in the political glory, far too many pastors and priests lap it up, indoctrinating their followers with the ideology of Christian nationalism: the false ideas that America is a Christian nation, and that there is no difference between one’s conservative Christian identity and one’s national identity.

Yet these same politicians, despite their claims to uphold biblical morality, completely ignore the Gospel. Instead, they try to cut access to health care for the poor and middle class, control the bodies of women and LGBTQ people in the U.S., and force public schools to teach our children a falsified and racist version of U.S. history. When these outwardly religious Republicans lose elections, they don’t think twice about changing the rules, attacking the right to vote or demanding that Congress throw out millions of ballots from 2020, which would have disproportionately affected the votes of Black Americans and other people of color.

Why, then, do so many conservative religious leaders turn their backs on Jesus to stick with their favorite immoral politicians? It is because they now worship at the altar of power, not God, as the title of investigative journalist Katherine Stewart’s latest book, “The Power Worshippers,” suggests. I don’t doubt that these pastors, priests and pundits believe they are doing the right thing, yet I am reminded of Luke 4:1-13, when Satan tempted Jesus with absolute dominion: “To you I will give their glory and all this authority; for it has been given over to me, and I give it to anyone I please. If you, then, will worship me, it will all be yours.”

Jesus didn’t fall for it, but the MAGA movement’s politicians and pastors most certainly have.

Trump’s attempted power grab on Jan. 6, 2021, featured  Christian nationalist signs that declared “Jesus is my king, Trump is my president.” The attack itself was partly inspired by the attendance of religious leaders at “Stop the Steal” rallies, including the book-burning pastor Greg Locke, the prominent Christian radio host and author Eric Metaxas, and the Catholic leaders Archbishop Carlo Maria Viganò and Bishop Joseph Strickland. The evangelist Franklin Graham initially downplayed the failed coup, dismissing it as the work of “antifa.”

I don’t doubt that these pastors, priests and pundits believe they are doing the right thing, yet I am reminded of Luke 4:1-13, when Satan tempted Jesus with absolute dominion.

Viganò and Locke have since joined the “ReAwaken America” megachurch tour headlined by Eric Trump, Michael Flynn, the disgraced former general and Trump national security adviser, and a host of MAGA celebrities. Tour speakers use their church platforms to spread QAnon conspiracy theories, decry political opponents and Covid vaccines as  “Luciferian,” and assure their audiences that everyone in the room is on “Team Jesus.” At one “ReAwaken America” event last year, Flynn even proclaimed that America should “embrace one religion.”

We’ve seen what happens when religious leaders partner with authoritarian rulers before: Not just when Pontius Pilate killed Jesus, but also when the Deutsche Christen threw its support behind Adolf Hitler, and in Eastern Europe today where Russian Orthodox Patriarch Kirill is among Russian President Vladimir Putin’s staunchest supporters.

Yet while Trump’s authoritarian MAGA movement has become all but synonymous with white evangelical Christianity, it does not speak for most Christians in the U.S., who are sick of seeing our faith hijacked for hateful political agendas.

For example, Christians Against Christian Nationalism is an inspiring initiative convened by the Baptist Joint Committee and endorsed by multiple denominational leaders. It is particularly notable for producing helpful resources that churches and individuals can use to identify and root out this toxic ideology from their own communities.

At Faithful America, the Christian organization I lead, more than 13,000 grassroots members have called on churches not to host the “ReAwaken America Tour.” We’ve also deployed a mobile-billboard truck to recent tour stops, exposing the speakers as false prophets who distort our religion to undermine democracy.

Another 20,000 Christians have signed Faithful America’s petition to Paramount and Roku, calling on the streaming platforms to drop the propaganda networks OAN, Newsmax and Real America’s Voice.

Holy Week is a time for Christians to unite in Jesus’ resurrection and call to new life, not be divided by the old life’s hunger for earthly power. It is my prayer that history will remember today’s Christians in the U.S. as standing in the tradition of the German theologian Dietrich Bonhoeffer and his courageous opposition to the Nazis, rather than as spiritual heirs to Hitler’s Deutsche Christen. This Good Friday, let us take up our crosses and love our neighbors by standing up to those brutal authoritarians who would destroy both democracy and the church in Jesus’ name.

The Rev. Nathan Empsall is an Episcopal priest and the executive director of Faithful America, an online community of grassroots Christians putting faith into action for love and social justice.

Christian Colleges: God Wants You to Wear a Mask to Class 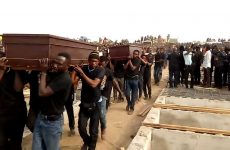 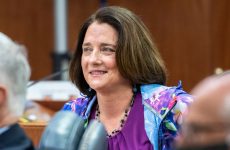 Letter: Compassion is a Christian value