The weekend that ends Christians’ Holy Week is upon us, and it starts with Good Friday.

It’s on this day that, according to the Gospel, Jesus was crucified and died for the sins of man, leading to his eventual resurrection on Easter Sunday. While many faithful Christians might already know, it does seem a bit odd to name the commemoration of the death of your savior “Good” Friday, doesn’t it?

Vicar Eric Heinrich of St. Mark Lutheran Church in Norwich was able to help break down Good Friday. He talked about its significance both historically and religiously, traditions St. Mark and other churches participate in, and that curious naming convention, too.

What’s so good about Good Friday?

Good Friday, simply put, commemorates the crucifixion of Jesus and his death on the cross. Why would this be “good?”

“Because Jesus is going to the cross to die for our sins,” said Heinrich. “Jesus goes obediently to the cross. He knows the purpose.”

Good Friday is a crucial day of the year as it celebrates the most momentous weekend in Christianity.

“His crucifixion leads to Holy Saturday, where He’s dead and in His tomb, and Easter Sunday, where He’s discovered that He has risen and everything He’s been preaching has come to fruition,” said Heinrich.

It’s the turning point of all creation, leading to his victory over sin and death and pointing to future resurrection by those who are faithful. Nowadays, most Christian denominations teach that all who are good will receive this resurrection, even if they aren’t practicing Christians. It’s through Jesus’ efforts that an afterlife is made real, allowing one and all to have their time in heaven.

What’s the history behind Good Friday?

While most history involving Jesus and his life are based off the gospels, his existence is, historically, largely accepted. He was a Galiliean Jew, baptized by John the Baptist, began his own ministry, and eventually came to Jerusalem on Palm Sunday.

“Jesus challenged the authorities of the Roman Empire,” said Heinrich. “Caesar and other leaders were considered god-like. Jesus was interfering with that, saying he was the savior.”

More so, his actions angered Jewish elders and the establishment. Recountings in the gospel show him questioning their authority and criticizing their actions, going as far as to call them hypocrites.

He would be turned over to Roman authorities by Judas and his own people, leading to his trial and eventual crucifixion and entombment. It’s this day that Good Friday commemorates, showcasing Jesus’ suffering and death in the 14 Stations of the Cross.

How do Christians and churches commemorate this day?

Depending on the denomination, Good Friday traditions can vary in certain ways. For the most part, however, they follow similar practices.

“Friday is a very solemn day for us,” said Heinrich, in talking about St. Mark’s clergy. “It’s a lot of reflection. We’ll be extinguishing candles and the sanctuary will get darker. We’ll be reverent and quiet, sort of in mourning.”

St. Mark’s will be hosting a sermon as well, as will most churches. They read the same text from the Bible. This year, it’s John chapter 18, verses 1 through 19, which depicts Jesus’ crucifixion. Heinrich said that, each year, churches will read from one of the four gospels.

Some churches also host a “cross walk” as well, where a member of the clergy or congregation will carry a cross as Jesus did and lead their congregation. It symbolizes Jesus’ suffering in having to carry His own cross and serves as a humbling show of faith.

Overall, Good Friday is a day of humble reflection and remembrance of Jesus and his sacrifice. St. Mark, as will most other churches, encourage people to stop on by and sit in for a sermon. 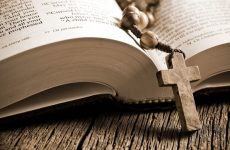